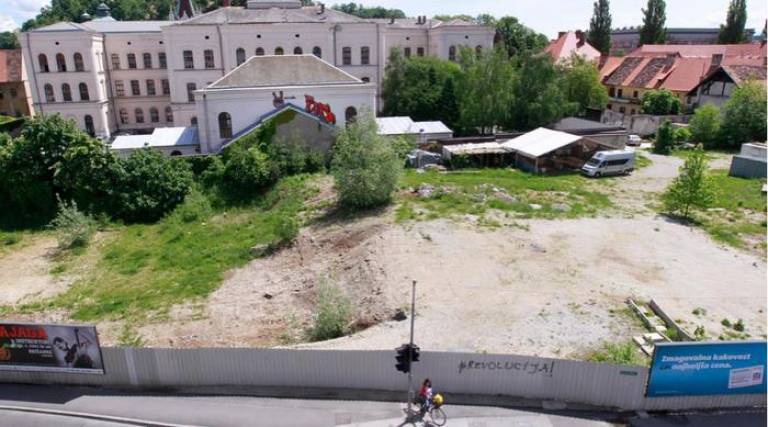 **Please note, this workshop has not been activated for this year. We hope to work in Ljubljana for the next series in 2017.**

Slovenia is usually referred to as the most developed countries of former Yugoslavia. The first to declare its independence in 1991, it was largely spared the atrocities of the conflicts and was able to join the European Union in 2004 and to enter the Eurozone in 2007. Slovenia is the country that left far behind its Socialist past to embrace fully European market economies. In 2004-2006, the economy grew on average by nearly 5%.

The 2008 financial crisis dramatically hit the country and especially the construction industry. In 2009, Slovenian witnessed the biggest decline in the European Union. Clear signs of the recession are visible in the fabric of the city: we here want to focus our attention on a series of large construction pits, abandoned in 2008 when the companies in charge of them went into administration. The absence of an appropriate legislation combined with the lack of a vision for these abandoned pits has produced an uncanny landscape of empty (or half-built) plots within the immediate surroundings of the city centre.

The main goal of this summerLab is to explore the potential of these empty spaces and to contribute to an ongoing discussion about what their possible future use. In fact, the city has proposed a series of solutions such as to transform them in temporary parking spaces or commercial advertising spaces (for jumbo posters). Yet, these solutions don’t solve (or even address) the problem of abandoned and neglected construction pits.

Participants will be asked to work in groups, choose one of the suggested locations, and work with local and international stakeholders to learn what has been already proposed, assess the existing ideas critically, and present new, innovative, and sustainable scenarios for the future of these places. The proposed lab will explore and expand the research and design work of KUDC3, a local association that tries to bring attention to this problem. The participants will be able to present their final proposals in a seminar open to the wider public.

Participants will critically investigate opportunities for the temporary use of the sites and design strategies for their long-term (functional and symbolic) sustainable transformation. Strategies might include policy recommendations and proposal for flexible regimes of land tenure. How can we reconnect these abandoned pits to the city, its communities, its uses? How can we plan their future in times of economic uncertainties?

The lab will start with a series of walks led by local architects, activists, and local inhabitants. Participants will be exposed to different narratives about the histories, values, and relevance of empty construction sites in the city centre. Participants will then work in group to draft proposals for these sites’ future.