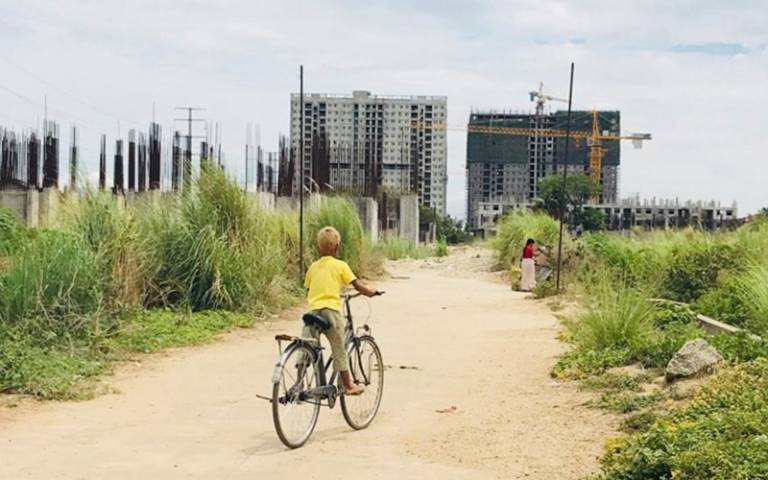 Pressure for economic development and the non-recognition of informal settlements, socially, politically and spatially, has facilitated their progressive erasure from the urban fabric. Spatial violence has often been an institutionalised practice, inscribed in policies and masterplans—seen particularly in authoritarian regimes and in the context of neoliberalisation of urban governance. While condemning ‘informality’ on the surface, authorities have often used illegal/informal practices to evict communities, violating domestic and international laws. Spatial violence has been repeatedly justified with arguments invoking the interest of the public, like the vision of a beautiful city, climate adaptation, and infrastructure development; while, in the absence of adequate frameworks and provisions of housing, informality is both ‘treated’ with and produced by displacement.

Shoko Sakuma is a development researcher and practitioner at Women for the World (WfW) and DPU graduate who works on capacity building and policy advocacy of informal settlements with communities and on urban planning issues in Southeast Asia.

Marina Kolovou-Kouri is an architect and development practitioner who works for Women for the World in several research- and action-oriented projects on the role of community-led housing as a pathway to urban equality; and urban safety

Dr Giovanna Astolfo is Lecturer at DPU where she combines research-based teaching and action learning from across Southeast Asia with a focus on non-conventional urbanisms, continuous displacement and migration, spatial violence and housing justice.

Dr Elizabeth Rhoads is a Post-doctoral Research Fellow at the DPU whose work focuses on forced evictions, dispossession, population registration, and property and citizenship. She has over a decade of experience in research and education in Southeast Asia.

Prof Hyun Bang Shin is Professor of Geography and Urban Studies and Director of the Saw Swee Hock Southeast Asia Centre at the LSE. His research centres on the critical analysis of the political economy of urbanization, politics of displacement, gentrification, housing in Asian countries.

Dr Catalina Ortiz is Associate Professor at DPU. Her research focuses on the ways in which the transnational flows of urban models, ideas, and tools shape the built environment and the political process of space production in global south cities.