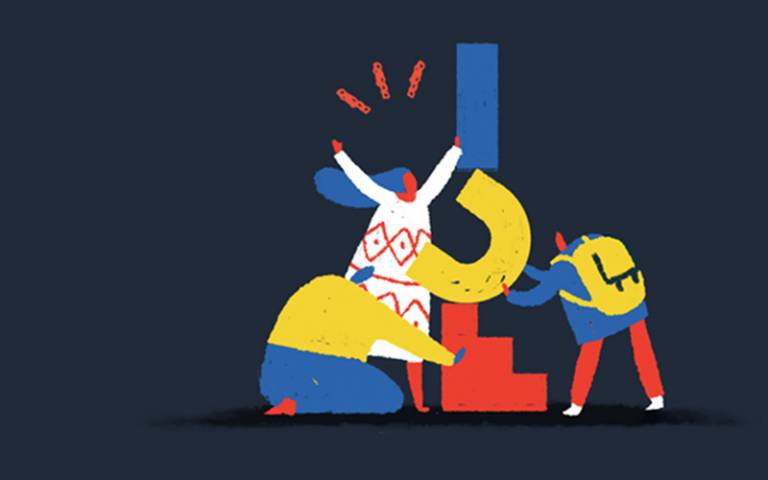 With the number of forced displaced people at a record level and less than 50% of refugee children attending primary education, improving educational and child-friendly infrastructure is of strategic importance.

The DeCID team has developed a practical toolkit to support those involved in the co-design of built interventions in urban areas with children affected by displacement.

It promises to be an exciting session on how the co-creation of public space with children can contribute to social cohesion and peacebuilding, how the field of architecture and other professions can contribute, and how the toolkit can help with the participation of children in the design of built environment projects.

Gareth Owen OBE, Humanitarian Director at Save the Children
Gareth has been Humanitarian Director at Save the Children UK since 2007, having originally joined the organisation in January 2002 as an emergency adviser. A senior humanitarian practitioner, Gareth has led operational responses in every major emergency over the past decade, most notably the Iraq conflict, the Asian tsunami and Cyclone Nargis, as well as in Haiti, Pakistan, East Africa, Niger and the Philippines. He was awarded an OBE in the 2013 Queen's Birthday Honours list for services to emergency crisis response abroad.

He is a former Trustee and Board Member of the Royal Institute of British Architects (RIBA) and served as Vice President International from October 2011 to September 2017.

In March 2016 Peter was elected Vice President Europe for the Commonwealth Association of Architects (CAA) and in September 2017 he was appointed as a Council Member of the International Union of Architects (UIA). He is also a trustee of ASF UK and a steering group member of the Global Alliance for Urban Crises.

In 2016, Peter also became the inaugural Chair of the UK Built Environment Advisory Group, a collaboration between the RIBA, the RTPI and the IStructE, the aim of which is to provide a more effective conduit for the transfer of built environment expertise to a range of humanitarian and development partners together with foreign governments. In January 2017 he was elected as Chair of the RIBA’s Sustainability and Ethics Commission.

Peter is currently working, together with UN Habitat, in connection with the Foreign & Commonwealth Office's Global Future Cities Programme, forming part of the UK Prosperity Fund, supporting 19 rapidly urbanising cities in 10 countries in South America, South Africa and Southeast Asia. He ais also currently retained as an architectural adviser to RIBA Competitions in connection with the Green City Kigali project in Rwanda.


Dyfed Aubrey, Inter-Regional Advisor at UN-Habitat
Dyfed is a United Nations Senior Advisor with a demonstrated history of working in the international affairs industry. Skilled in Urban Policy, Urban Planning, Sustainable Urban Development and Crisis Recovery. Strong community and social services professional with a MSc focused in Development Planning from the Development Planning Unit, University College London. He was UN-Habitat Regional Director of the Arab States between 2014 and 2017.


Cecilia Vaca Jones, Bernard van Leer Foundation
Cecilia (@CecyVacaJones) joined the Foundation in 2016 as Programme Director, and became Executive Director in 2020. She has over 20 years of experience managing social development policies and programmes. Before she joined the Foundation, Cecilia was the Coordinating Minister of Social Development of Ecuador from April 2013 to March 2016. She was responsible for policies in health, education, housing, sport and social welfare.

Over the years, she also held policy-making roles in various other Ecuadorian ministries — including the Ministry of Labour, the Ministry of Social Inclusion and the Ministry of Education — where she championed policies to improve the conditions of children, women and indigenous populations.

Amongst the most relevant policies she launched, it is important to highlight the cross-sectoral early childhood policy, bringing unpaid household workers into the social security system; eradicating child labour on rubbish dumps; and new laws on food labelling to help people make informed choices about their nutrition.


Kelly Alvarez Doran, Senior Principal, MASS Design Group
Kelly leads our MASS Design Group London office and oversees MASS’s work in Europe, West Africa, and Global Business Development. He joined MASS in 2014 to lead MASS Kigali office, overseeing the growth of the practice from an office of 8 to 80 over a five year period. He has led the design and implementation of several of MASS’s projects across East Africa, notably the award-winning Munini District Hospital and Rwanda Ministry of Health’s Typical Hospital Plans; headquarters for both One Acre Fund and Andela in Kenya; and the Rwanda Institute for Conservation Agriculture. He has held an adjunct professorship at the University of Waterloo and a visiting lectureship at Harvard University.

Joana Dabaj, CatalyticAction and DeCID
Joana is an architect, urban designer and researcher. She has valuable experience in architecture in development, sustainable design, cultural heritage, migration and human rights in the Middle East. She holds an MSc from University College London (UCL) in Building and Urban Design in Development.

Her recent work revolves around working closely with displaced and host communities in Lebanon to develop inclusive educational spaces; this includes participatory planning, design and implementation of playgrounds, public spaces and schools. She is a founder and principal coordinator of CatalyticAction.


Dr Sandra El Gemayel, Froebel Trust and Institute of Education, UCL
Sandra is a research consultant on the DeCID project, drawing on her expertise of working with children affected by displacement. She has recently completed her PhD in Education at the UCL, Institute of Education. Her research concerns the importance of play for young refugee children and seeks to promote their rights and play opportunities in Lebanon. Sandra is especially interested in conducting research with young children using participatory methods, helping to make their voices heard.