Collaboration and participation: At the frontiers of the urban 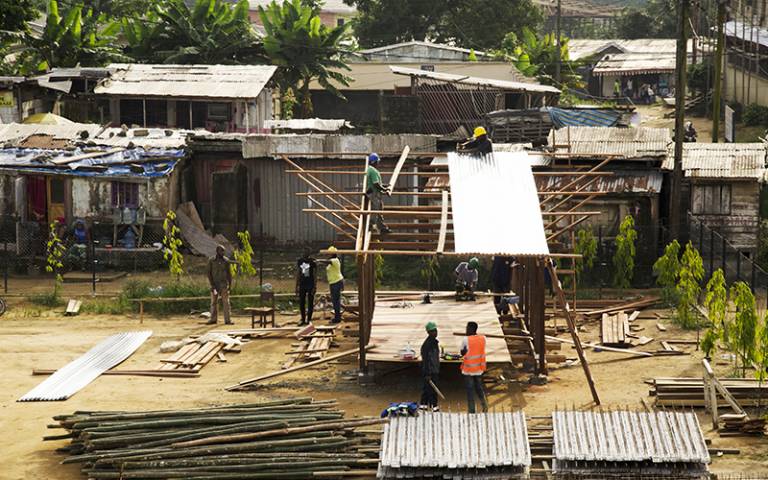 As part of a three-day international conference, the DPU hosts two sessions related to experiences of collaboration and participation in urban research.

These sessions form part of the programme for the conference At the frontiers of the urban: thinking concepts and practices globally (10 – 12 Nov), organised by UCL Urban Laboratory, and supported by the DPU.

UCL staff and students are welcome to attend these sessions for free, without purchasing a conference ticket. Please note that you will require a conference ticket for the majority of other sessions, or if you are not a member of UCL.

Scaling up the Fight to Stay Put on London’s final gentrification frontiers?

The state-led gentrification of the final gentrification frontiers in inner London – council estates – has been going on since the late 1990s and continues today. In this paper, I focus on the resistance to gentrification that emerged in and around some of these estates in which I have been involved as a public scholar. I discuss some of the different forms of resistance and what they achieved. I discuss the value of collaboration and participation with/in local communities on the front line of gentrification. In so doing I reflect on the recent rise of self-identified scholar activists in urban studies, the care and ethics required for such work, and the possibility of comparative and globalised knowledge production in fighting gentrification. I reflect (briefly) on the ‘Urban Activism: Staking Claims in the 21st Century City’ conference I recently attended at Harvard in the US (see https://urbanactivism2019.org/), which aimed to create a collective discourse on how critical urban research and urban political activism are increasingly converging and creating a common field of inquiry and action. Like this conference, the Harvard conference connected scholars from various fields such as planning, geography, anthropology, sociology, history and critical urbanism with activists working on housing rights and the right to urban identity and the city more generally. But what now?

[Abstract title TBC]
Just Space – an informal alliance of around 80 community groups, campaigns and concerned independent organisations, formed to act as a voice for Londoners at grass-roots level during the formulation of London’s major planning strategy, particularly the London Plan.

In the face of conflict, mainstream planning points to participatory and businesslike processes, whose core and primary purpose is to avoid, bypass, mediate or resolve conflicts that are seen as dysfunctional, costly, or anomic. Civic peace and harmony would constitute, in this perspective, the condition through which the corporate city achieves its competitive potential: the polis submits itself to the city, politics gives way to business. Preventing, avoiding and resolving disputes would establish the kingdom of a pacified and consensual city (society).

Conflictual Planning, on the contrary, points to and bets on the creative potential of conflict, from which emerge collective subjects that rescue the city as political arena, as a place in which citizens face and confront each other to discuss and arbitrate its fates. Now it is the polis that imposes itself on the city.

The paper tells the experience of the Popular Plan of Vila Autodromo, where 500 hundred poor households were threatened with forced removal by the Olympic Park, the main site of the Rio de Janeiro 2016 Olympic Games. With its technicalities and language, planning practices and discourse are usually part of the legitimation process of the capital dynamics and needs. With the technical support of an academic consulting group, the case of the Popular Plan of Vila Autodromo shows that planning practices and discourse can be a weapon of resistance. Fighting for Planning and Planning for Fighting: the Vila Autodromo resistance and alternative planning became an inspiration to many communities in Brazilian cities.

This paper will focus on the African Fabbers Project [AFP] case studies developed in cities around Morocco, Ghana, Mali, Burkina Faso and Senegal. The project bridges informal and advanced approaches with the aim of reshaping public spaces as spaces of relation and production through collaborative practices. Such an approach is based on the exploration of new paradigms on circular economies and “local industry” potentials for African cities’ post-colonial growth.

Of the 500 million people living in urban areas in Africa by 2020, 90% will still be living in slums (UN-Habitat). The problems of African societies are often depicted by our media as just an object for humanitarian aid. However, as explained by major international analysts, three powerful positive trends are likely to sustain Africa’s growth in the coming years. First of all, as mentioned by UNDP, the continent has a young population with a growing labour force – a highly valuable asset in an ageing world. Secondly, Africa is still urbanising and much of the economic benefit lies ahead. Productivity in cities is three times as high as in rural areas and, over the next decade, an additional 187 million Africans will live in cities according to the United Nations. Thirdly, African economies are well positioned to benefit from rapidly accelerating technological changes that can unlock growth and leapfrog the limitations and costs of physical infrastructures in important areas of economic life.

Based on this premise, the above-mentioned case studies will be compared and analysed with the aim of developing possible design-to-build processes able to bridge vernacular, spontaneous and advanced cultures, generating new opportunities of self-organisation and self-production for an African urban context. Thanks to the support of the Italian Ministry of Foreign Affairs, the AFP has therefore recently implemented the African Fabbers School (Douala-Cameroon): the first community-oriented school of urban ecologies and self-construction in Africa.

This presentation engages with the discourse of mapping and design within participatory urban development, asking if and under which conditions participatory mapping methodologies aimed at representing the social value of place can unleash the agency of mis- or under-represented actors and urban areas. The reflection is based on the work of Architecture Sans Frontières UK – a leading design non-profit based in the UK – and its ongoing collaboration with the Sierra Leone Urban Research Centre in Freetown, Sierra Leone.

This is based on the premise that mapping has the ability to construct spaces as well as social relations, and that maps have agency in that they can influence urban decision-making processes by challenging dominant views of place and suggesting alternative representations of otherwise misrecognised groups. The analysis focuses on the contribution of participatory mapping to SLURC’s ongoing efforts to facilitate neighbourhood planning processes in Freetown’s informal settlements. Since 2017, SLURC has been seeking to mobilise local communities around the production of Community Action Area Plans, as a bold and proactive planning tool for upgrading of informal settlements through a bottom-up process that engages with formal policy frameworks.

The paper interrogates the ongoing experience of mapping two informal settlements in Freetown, and assesses to what extent and under which conditions the collaborative production of maps has enabled more inclusive forms of urban planning. The discussions is articulated around three main themes: (i) mapping as production (addressing who is included/excluded in the process of mapping, and who controls access to information); (ii) mapping as visualisation (discussing the visual form of maps); (iii) mapping as audiencing (addressing who the maps are for and how information should be disseminated). The paper concludes by assessing the potential of participatory mapping to activate the agency of under-represented constituencies to influence policy and planning processes.

This paper explores the knowledge-for-action developed in the context of diverse cities in the South East Asian region, connected through the learning platform of the Asian Coalition of Housing Rights (ACHR). The ways such community-led processes address their participants’ material living conditions and empower communities has been widely documented, and much of the success of these processes is known to be built on developing knowledge as a basis for negotiation with the state, indeed for refocusing (parts of) the state on its ‘public’ function. Less visible in these accounts are the diversity of actors involved in the ‘people processes’ and the mechanisms of their co-production.

The last four decades have witnessed a growth in the co-production of knowledge on, and collaborative responses to, urban (in)justice. In a context marked by increasing socio-spatial and environmental inequalities, and the growing vulnerability of precarious neighbourhoods, viz. the financialisation of the urban, new or reinvigorated platforms of solidarity, advocacy and action have emerged. Bringing together a constellation of actors, these platforms are characterised by a focus on developing ‘counter-knowledge’ on urban processes, their effects on those largely marginalised from planning, and alternative urban development pathways. Coming to grips with the mechanisms and the potential of these alliances for urban transformation is a key priority in the search for more just urban futures and the fulfilment of the SDGs and NUA. Drawing on archival data analysis and interviews, we centre our reflections on unpacking the partnerships supporting community-led processes in place, spanning community networks, NGOs, community architects, academics, professionals, community mobilisers, financial institutions and sympathetic actors in the state; the particular configurations of assembled knowledge-bases these represent; the mechanisms by which an ecology of knowledge is negotiated; and the tensions that arise in the process. We reflect on the contribution of the combined knowledge repertoires to the overall legitimacy of community-led development, the ways in which particular external challenges activate different knowledge-bases, and the challenges around knowledge translation, objectivity, validity and legitimacy of the different knowledge at play.

How can cities across regions learn from slum upgrading strategies using transmedia storytelling? Learning across cities is vital to building cities that leave no one behind. Even though learning about slum upgrading strategies [SUS] across cities is imperative for urban governance and planning, how such learning occurs and the types of knowledge that are valued, documented and circulated have been less scrutinised and understood. This paper will explore a novel methodology to understand and foster the often dispersed and fragmented efforts of promoting SUS by introducing the practice of transmedia storytelling. Using storytelling as method allow to foster empathy, to understand the meaning of complex experiences and to inspire action. The methodological approach builds on decolonial debates about the urban as it questions the existing geo politics of urban knowledge, it is territorial and relational, amplify narratives often silenced, engages with the pluriverse, links emotions and reason, and points for imagination of the future action. The project uses as pilot case the city of Medellin that has been considered a benchmark for SU strategies and focuses on the co-design of a transmedia platform involving local grassroots organisations working on informal settlements, local city officials, civic hackers, and leaders of transnational development networks. We contend that visual storytelling and digital platforms for public deliberation and policy debate can enhance methods for learning across cities and galvanise collective action when different stakeholders are involved. Framing storytelling as sensing-thinking offers a decolonial approach to urban learning recalibrating the epistemologies for trans-local learning.