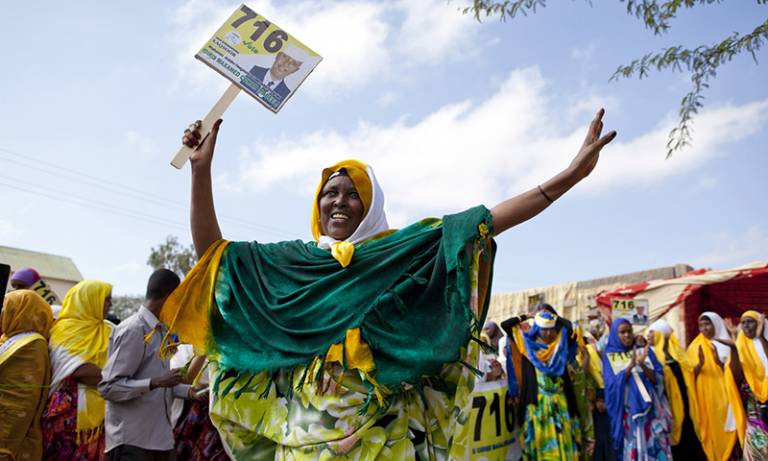 Book now
Somali women are vocal and active members of all sectors, but struggle to achieve significant breakthroughs in the political arena.This session will consider the reasons for that apparent glass ceiling in Somaliland, and the ways in which the situation might change in the future. The session will also touch on some of the pertinent issues that face women and girls in the country, such as education, gender-based violence, the women’s quota and women in prison as well as how elders might be engaged in transforming harmful traditional practices against women.
As Executive Director of NAGAAD, Nafisa is at the forefront of the struggle to introduce a quota for women in Somaliland representative political bodies, as well as more generally in efforts to promote equitable outcomes for Somaliland women. She holds a Master’s Degree in International Cooperation and Humanitarian Aid from KALU Institute, Spain, and has been a social and development worker for the past 25 years. She is chair of the Somaliland HIV/AIDS Network (SAHAN) and the University of Hargeisa-based Observatory of Conflict and Violence Prevention (OCVP), vice chair of the University of Hargeisa Board of Trustees, treasurer of the Somaliland Non-State Actors Forum (SONSAF), a board member of the Academy for Peace and Development (APD), and a member of the steering committee of the Somaliland Development Fund (SDF).
Hodan has worked in the development sector for over 16 years, and in her role with CARE International, she supports local civil society actors, including NAGAAD, to build their advocacy capacity, inclusive governance portfolios and communication strategies. Born in London, she graduated in Politics and Social Policy from Brunel University and moved to Hargeisa with her family in 2007.
Michael is a Senior Lecturer at UCL’s Bartlett Development Planning Unit (DPU) and, and for the past thirteen years, his research has focused on the political economy of the Somali Horn of Africa, including the evolving political settlement in Somaliland. He has also been a part of the coordination team for international election observations to Somaliland elections in 2005, 2010 and 2012 as well as the 2016/17 Voter Registration process, and is currently PI for the ESRC-funded research project ‘Political Settlement in Somaliland: a gendered perspective’.
The ESRC-funded research on ‘Political Settlement in Somaliland: A gendered perspective’ has been looking at the realities and perceptions attached to political involvement of both women and men in Somaliland, taking an explicitly gendered perspective for the analysis. Team members, including PI Dr Michael Walls, Co-I Malou Schueller and Amina-Bahja Ekman, will outline preliminary findings from the project.
Somaliland is currently experiencing a severe drought in the eastern parts of the country. As well as the presentations referred to above, this event will include a brief update on the drought, and collection.
Speakers: Nafisa Yusuf Mohamed, Executive Director, NAGAAD, and Hodan Hassan Elmi, Head of Governance, Advocacy and Communication at CARE International in Somalia/Somaliland
Chair: Nimo-Ilhan Ali, SOAS
Panel: Dr Michael Walls, Malou Schueller & Amina-Bahja Ekman, research team, ESRC-funded project ‘Political Settlement in Somaliland: A gendered perspective’