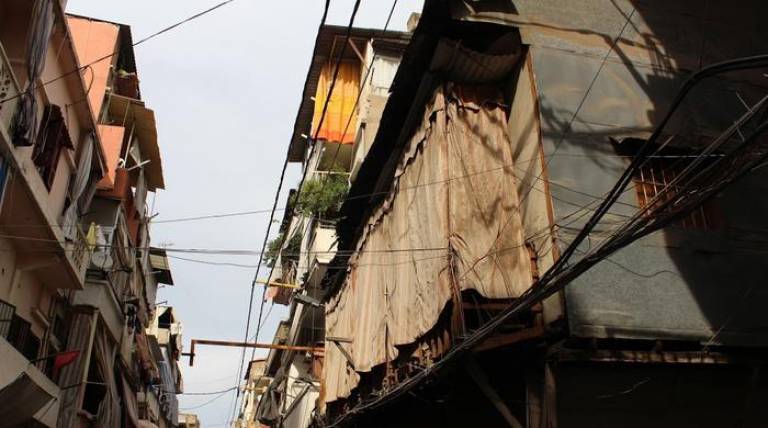 The Beirut River marks the edge of Municipal Beirut. It was once a prosperous river connecting the valleys of the country to the Mediterranean Sea, and promoting a social and ecological existence that resembles a healthy natural habitat. In light of industrialisation, the river stood victim to major changes in the city. The Beirut port, conveniently located near the river, motivated the transformation of neighbourhoods along the waters into industrial zones, inflicting a drastic impact on their pollution.

The river’s concretisation in 1968 as protection from flooding left its waters scarce, exterminated social behaviours along the river, and converted it into an unintentional open-air sewage in the city.  More recently, during the garbage crisis of Beirut, the river served as a temporary dump for the entire city.

Along the edges of the Beirut River are culturally eclectic neighbourhoods, currently detached from the city and in dire need of upgrading. Urban mobility in these areas are greatly demarcated by the deteriorated and concretised river which prevents natural interconnectedness.

Further isolation is due to the social fabric of these neighbourhoods that accommodate a number of populations in informal, temporary and degraded housing conditions: rural Lebanese in search for employment in the city, generations of Armenians originally fleeing the Armenian massacre in 1922, Kurds from various waves of migration, Palestinian refugees of 1948 and later years, Arab labourers, and more recently Syrian refugees.

Deepening the malnutrition of the neighbourhoods is the consequence of the fifteen-year civil war which put them under the spotlight in heavy battling and destruction.

The Beirut summerLab 2016 has questioned the influence of a potentially natural element on its immediate surroundings, and as an opportunity for the whole city. Participants have learned from experts and activists that have been concerned with the river and its environment, and reimagined the river as a naturally flourished corridor in the city.

They have performed design research on site, constructed alternative narratives of the River and developed people-centred strategies for its sustainable future. The interventions that came out of the workshop have feed into the work of already existing initiatives to rehabilitate the river and its neighbours.

Our partners ALBA had kindly offered free accommodation to the first 15 applicants.

Further information is available in our Beirut programme PDF