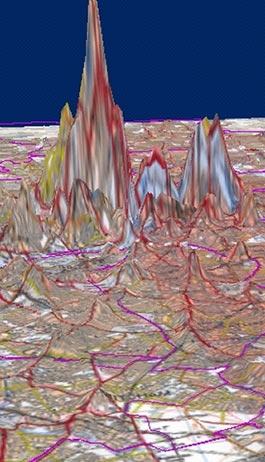 CASA's first project, beginning in late 1996, was for the Department of the Environment's (DOE) Planning and Land Use Statistics Division (PLUS) and involved the definition of town centre boundaries as part of a wider programme, designed to produce a new census of retail activity. The Retail Census of Distribution was abandoned in 1971 and this project represented the culmination of successive lobbying by retailers and developers for new data as well as the recognition of the importance of town centres by government. The national roll-out of this census will occur in 2003 and the various projects that CASA has undertaken since 1996 are central to this.

The original project developed definitions of 12 different town centres in England and Wales and showed how new data sets based on employment, turnover, floorspace, and ratable values from the ONS and the VOA at the level of the unit postcode could be used to define key indicators of town centredness. From this index, town centre boundaries could be defined by experts and these would thus form the basis of the reporting units for the national census. The method depends strongly on visualising the town centre surface and then slicing it according to expert judgement of where the town centre boundary best lies. The town centres website reports the original pilot study. Since then, a feasibility study has been developed for Greater London, and an associated project funded by EPSRC has developed these indicators in the context of sustainability on the premise that sustainable town centres are an important concern of contemporary planning policy.