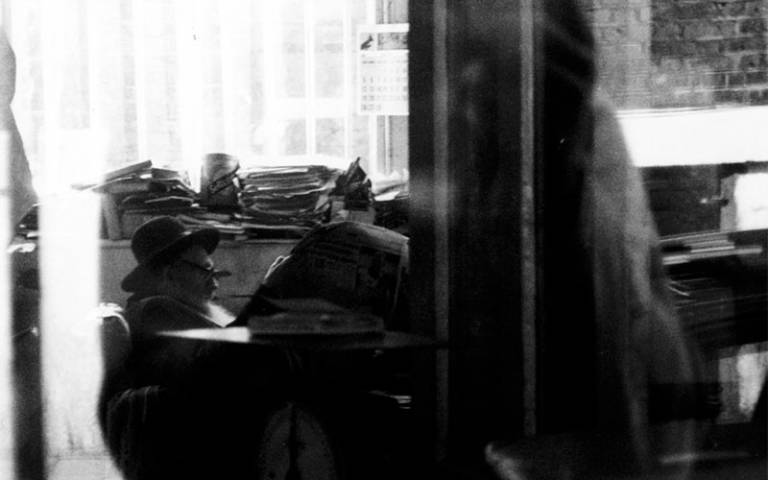 The East End of London has long been a destination for migrant groups. In the 1880s prompted by pogroms and economic hardship thousands of Jewish refugees left Eastern Europe and the Pale of Settlement. Many disembarked at the Port of London and over 100,000 settled in London’s East End where there was an already established Jewish community and cheap lodgings to be found. By 1900 Whitechapel and Spitalfields had become the heart of a thriving Jewish quarter, Yiddish was the language on the streets, and in places such as Petticoat Lane over 95 per cent of the population were Jewish immigrants.

By the time of the outbreak of war in 1939 the community had already started to dwindle, although there was still a visible Jewish presence in the area until the 1980s. However today, the bustling Jewish street life, commercial and trade centres, social, political, religious and entertainment hubs that dominated the area for nearly a century have all gone. Few are left who remember this lost world – the Jewish East End is about to slip out of living memory.

The Memory Map is a new digital resource designed to capture and preserve the history of Jewish East London and to bring the stories and memories of this vanishing landscape to new audiences. The project is a collaboration between the artist and writer Rachel Lichtenstein and three Bartlett research units: the Centre for Advanced Spatial Analysis, the Space Syntax Laboratory, and the Survey of London. Lichtenstein, through books including Rodinsky’s Room (1999), On Brick Lane (2008), and Diamond Street (2013), has been chronicling the history of the London Jewish community for much of her career. Bartlett researchers, across projects including Survey of London Whitechapel and Space and Exclusion, are at the forefront of using digital tools to document and analyse the history of space, place and culture. This project represents a synthesis of the Bartlett’s digitally-driven methodologies and Lichtenstein’s psychogeographic approach, and seeks to create a lasting document of both the history and memory traces of the Jewish East End.

In addition to the Memory Map itself, the project will release the software used in its creation as an Open Source toolkit to enable local history groups, museums, and researchers to conduct their own memory mapping projects. If you would be interested in using the toolkit, or have any other questions about the project, please contact Duncan Hay at d.hay@ucl.ac.uk.