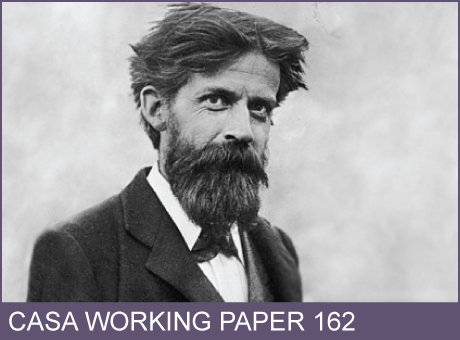 We argue here that Patrick Geddes had a consistent and integrated 'grand theory' which underpinned his ideas on biology, sociology and town planning. This 'grand theory' combined a theory of life with a neovitalistic interpretation of evolution, which emphasised co-operation and social union, and implied the idea of a 'Great Transition' that Geddes believed would ultimately transform human society, the latest in a line of transitions over evolutionary history.

This theory, however, is not well understood: partly because Geddes worked in an undisciplined manner, rarely synthesising his ideas and communicating them to others in coherent printed form but also because his view of life was essentially practical and experiential, and because his interpretation of evolution did not fit with mainstream biology. In this paper, we suggest that the theory can be much better understood by revisiting Geddes' biological work, in particular, his book The Evolution of Sex and subsequent works written with J. Arthur Thomson, his former student and life-long collaborator on matters biological. Interpreted in terms of this 'grand theory', Geddes' career was not merely a case of his moving on from biology to sociology and town planning, but part of a more coherent mission to understand life and evolution in its totality, a quest for theory and action that underpinned all his activities to the end of his life.

This working paper is available as a PDF. The file size is 520KB.