CASA can assist your organisation with a range of consultancy activities, including:

See below for examples of our work. For more information, email casa@ucl.ac.uk. 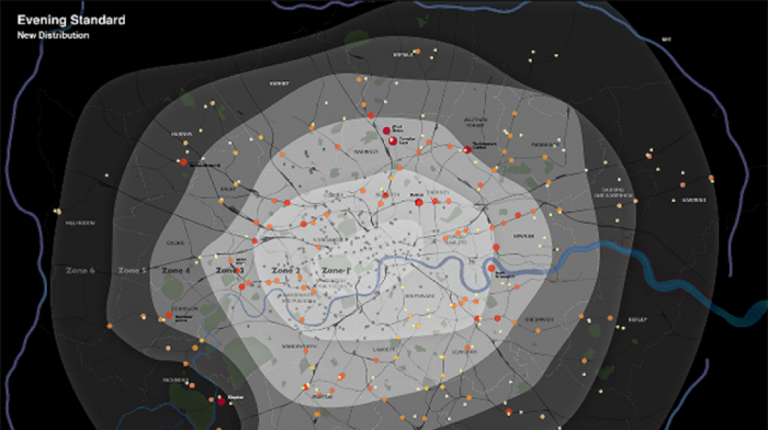 Maps can help businesses reflect where they currently are and where they’re aiming to go.

When faced with the challenge of how to best communicate significant changes in the distribution network of the London Evening Standard newspaper, ESI Media turned to CASA for our expertise in mapping and visualisation.

Adding an extra 200,000 newspapers per day to their existing distribution network of 700,000 newspapers represented a big step for the company. It was decided that attractive, high-specification mapping would be great way to communicate these changes, both internally and externally.

Without the expertise to complete this task in-house, ESI, with the support of UCL Consultants Ltd (UCLC) asked Dr Ed Manley to develop a set of maps that reflect current and proposed distribution networks.

Ed worked closely with ESI, drawing up a set of specifications for the map, and established the types of information ESI saw as suitable for supporting their message.

In developing the visualisations, Ed undertook the management and cleaning of all datasets, the sourcing of supporting information (including the construction of transport zone regions), and the design and cartography of the maps.

Throughout the process, Ed and UCLC remained in close contact with ESI, exchanging draft designs for review and responding to feedback, until the point where ESI were happy with the product. The expansion was announced, alongside the supporting maps, on the London Evening Standard website.

Adam Joseph - Strategic Insights Manager for ESI - said: “We were impressed with CASA’s high levels of expertise in the mapping area, and delighted with both the level of the service we received and the high quality of the resulting maps. They say a picture tells a thousand words – our new maps from UCL tell 900,000 stories.”

Effective data visualisation can be a powerful tool when presenting information and engaging stakeholders.

The Home Office recognised the need to improve the way in which it presented data - for both internal and external communication.

While many of its researchers and analysts were numerically and analytically skilled, few had received formal training in data visualisation. As such, the presentation of data had typically been limited to graphs, potentially missing out on more engaging visualisations.

In seeking to address this, the Home Office turned to CASA to explore the delivery of data visualisation training. The aim was that participants learned the critical and theoretical skills required both to create engaging data visualisations.

As such, a bespoke one-day training course was developed and delivered by Dr Ed Manley and Dr Martin Zaltz Austwick.

The course started by introducing participants to the art and science of data visualisation, covering the critical, qualitative and quantitative considerations that should be made in the construction of new data visualisation.

The training then moved on to practical delivery, working with relevant Home Office datasets and only using software available to the analysts in their day-to-day activities. As part of this second section, participants were shown how even basic programs like Microsoft Excel and PowerPoint can be used to create effective data visualisations.

The first training session was conducted in February 2015, and a second session took part in July 2015 as part of an ongoing arrangement.