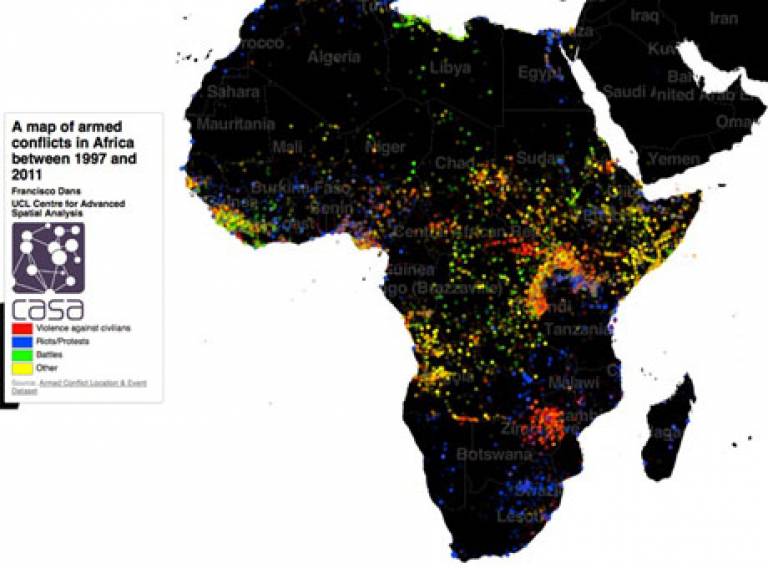 Francisco Dans is a Design student at Goldsmiths who has spent six weeks in CASA on a work placement prior to the completion of his BA. He has been working alongside some of the people at CASA to develop maps and visualizations, mostly based on their field of research.

During the last week of his stay here, he developed a map that features all the armed conflicts in Africa in the period between 1997 and 2011. The data comes from ACLED, a massive dataset that, in real time, tracks all violent incidents in the African continent. Led by Professor Clionadh Ralegh of Trinity College Dublin, ACLED is an initiative that combines the efforts of several researchers in different universities, and, according to their website, has been funded by the World Bank, the CCAPS Minerva Project (U.S. Department of Defense) and the ERC.

The map divides the conflicts in four general categories: violence against civillians, battles, riots/protests, and other events. The colour markers are set to a low opacity in order to better appreciate the different events in spite of overlapping, hence the diverse shades of colours. When pointing at one particular point with the cursor, a tooltip with information on the event appears, including the date, exact place, and the press note associated to it (all this data also coming from ACLED).

The map was developed in TileMill and has received coverage from the online edition of the American magazine The Atlantic. You can explore the map here.