UCL Public Event of the Year Award for Team CASA 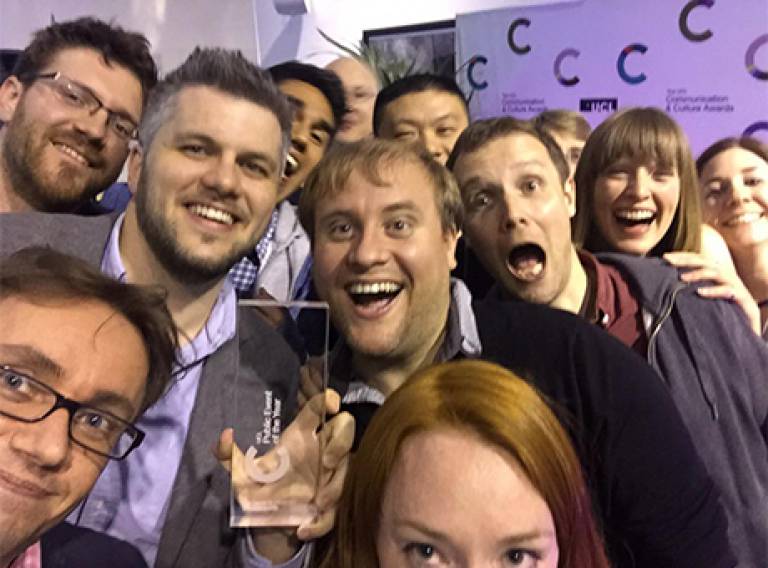 In May 2014, Walking on Water took place at Grand Designs Live at the ExCel centre.  The exhibition was a showcase of the current vibrancy of the Lower Lea Valley and a point towards its future as a “technology hub”, as envisaged by Lord Mawson. It was a large collaboration involving several parts of UCL, curator Richard Mallett and artist Frank Kreber, facilitated by Kim Townsend in the UCL Public Engagement Unit and supported by Adam Harman in UCL Estates and Stephen Caddick in UCL Enterprise. 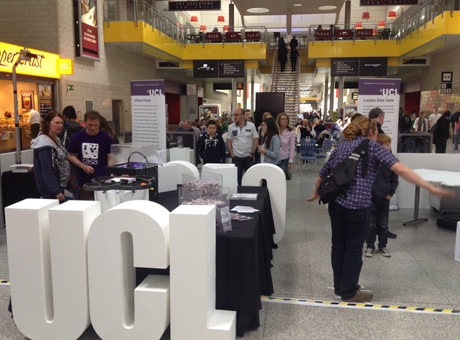 CASA delivered UCL’s presence at this event, showcasing interactive technologies and visualisations exploring the future of cities and the impact of technologies on urban life in a large exhibition which ran from Friday 2nd until Monday 12th May 2014.  The exhibition was manned throughout meaning that almost every masters student, PhD student, and staff member within CASA took part, speaking to members of the public about our work as a unit and explaining the role of UCL as an institution. 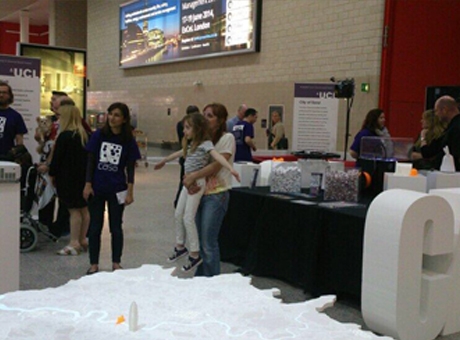 Grand Designs Live attracts over 100,000 visitors and we were positioned in the ExCel concourse, which was free to enter, allowing a wider range of visitors. This project communicated work around active research projects around 3D mapping for community planning using Drone technologies, real time Agent-Based models which respond to changing models to simulate pedestrian flows around different urban space, use of virtual environments and 3D printing for planning, city dashboards which measure the “metabolism” of the city, and tools for making virtual data physical. These engaging exhibits encouraged conversation, curiosity and discussion with visitors; at busy times, they served as spectacles that piqued people’s interest – at quieter times, facilitated more in-depth conversations about our research. The event was much larger than anything we had previously attempted, both in terms of attendance and the number of exhibits and demonstrations we were presenting – and the team rose to the challenge.

We are delighted to have won this prestigious UCL award as a department in recognition of all the hard work that went into this event.

Read more about the awards here.