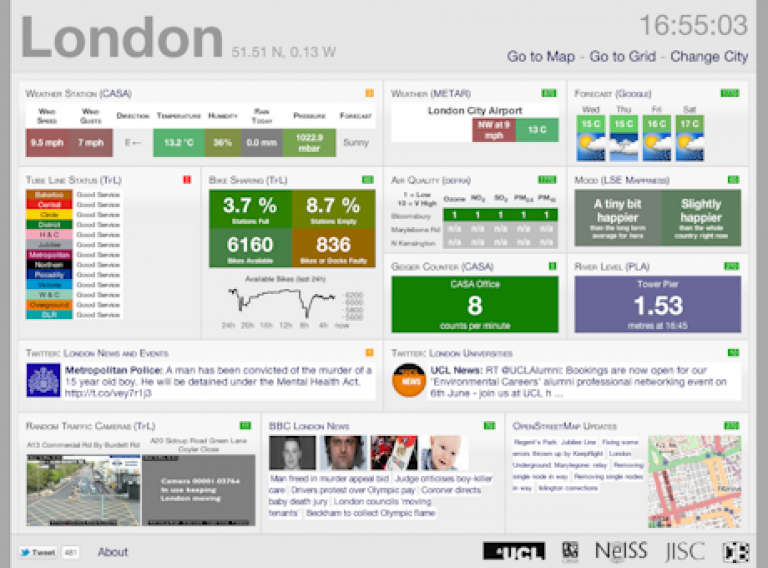 CityDashboard was launched in London at the CASA Smart Cities conference in late April, and introduced to a pan-European audience at WhereCampEU the following week in Amsterdam, where a special "Amsterdam" version of the otherwise British-centric project was shown.

CityDashboard is designed to be an at-a-glance view of eight cities around Great Britain. It combines official, observational and social media data into a single screen, the dashboard, which updates continuously as you watch it. There are two alternate views for each city - the map view shows point data in real-time, and the grid view is a more minimalistic view, showing a series of boxes that change colour and size based on the data they represent. Data includes weather (measurements, observations and forecasts), background count, tube line running, bike sharing station status, air quality measurements, mood, river levels, Twitter trends, featured tweets, traffic cameras, BBC local news stories and OpenStreetMap updates.

CityDashboard is accessed through a website - http://citydashboard.org/ - and also supplies data to CASA's London Data Table, PigeonSim, and potentially a number of other projects that are in the pipeline.

CityDashboard is a NeISS (National e-Infrastructure for Social Simulation) project funded by JISC.  It was developed at CASA by Oliver O'Brien and designed by Duncan Smith.