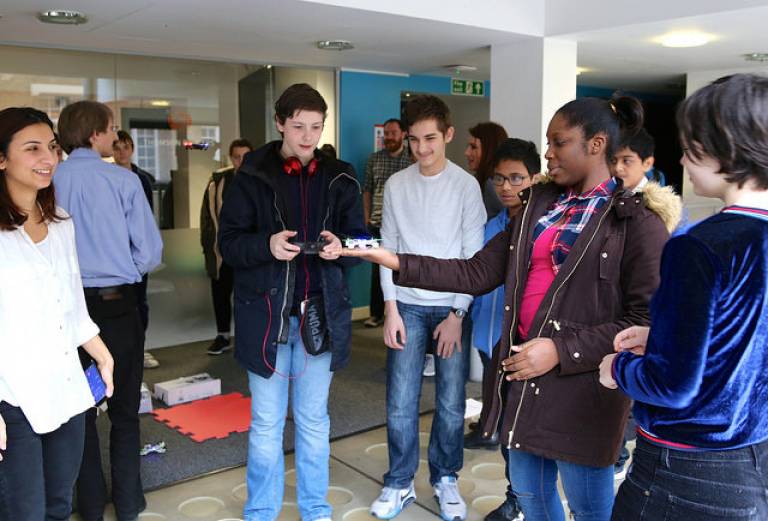 Staff and students from CASA led technology workshops for young people this month as part of a series of Coding for Year 9 masterclasses which partnered UCL Engineering with the Royal Institution. PhD students and staff ran activities around drones, 3D modelling, wearable technologies, spatial cognition, mobile EEG, sensing, and spatial visualisation, with students from our MRes in Spatial Data Science and Visualisation and MSc in Smart Cities and Urban Analytics joining in to support them.

On March 5th, Richard Milton, Flora Roumpani and Oli Dawkins led a Drones for Good and 3D Design session, starting with a presentation on the ReMap Lima project about how drones were used for mapping to generate 3D models, and leading to the group building their own micro quadcopters. These were modified versions of the HubSan X4 H104C which is a 95mm quadcopter retailing for around £32. Our Director, Andy Hudson-Smith, had been 3D printing the frames all week, so rather than the off-the-peg frames, we had a dragonfly, two butterflies, and two ghosts. The flight controllers and motors were attached to the custom 3D printed frames using a combination of foam tape and elastic bands. Most of these homemade drones survived until the end of the session, and lived to fly another day. The second part of the workshop was on 3D modelling using Sketchup and showed the students the Oculus Rift roller coaster demo and the Quadcopter simulator. They then built their own models of anything they felt like building so that they could all be imported back into a 3D scene using Unity. They were taught how to construct objects and how to add textures to them. In the space of a morning, we went from drones for mapping to create a 3D printed Lima landscape to 3D printing custom drones and using computer graphics to generate virtual environments. 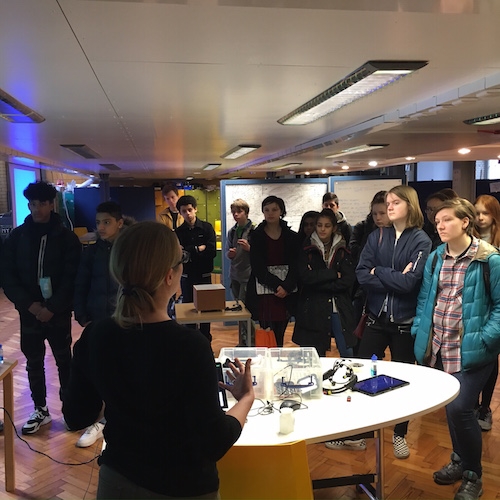 On March 19th, Kaisa Puistinnen, Panos Mavros and Petros Koutsolampros led their own masterclass - Kaisa leading on wearable tech and soft circuits, some of the group’s first interaction with a needle and thread, Panos demonstrating the joys of EEG and leading a navigation quiz in the north UCL observatory, and Petros took students out and about with homemade Arduino circuits to map noise levels around the UCL campus.

Congratulations to the team leaders (Flora, Kaisa, Oli, Panos, Petros and Richard) and huge thanks to the masters students who gave up their Saturday mornings to help (Angelos, Anouchka, Juliette, Luigi and Nathan), and to Andy Hudson-Smith, Alasdair Tatam, Sonja Curtis and Martin Zaltz Austwick for additional support. Last but not least, huge thanks to Elpida Makriyannis from UCL Engineering, who put together the whole programme, and made the events possible.