Improving road safety in cities could result in a lower rate of violent crime, according to CASA researchers. 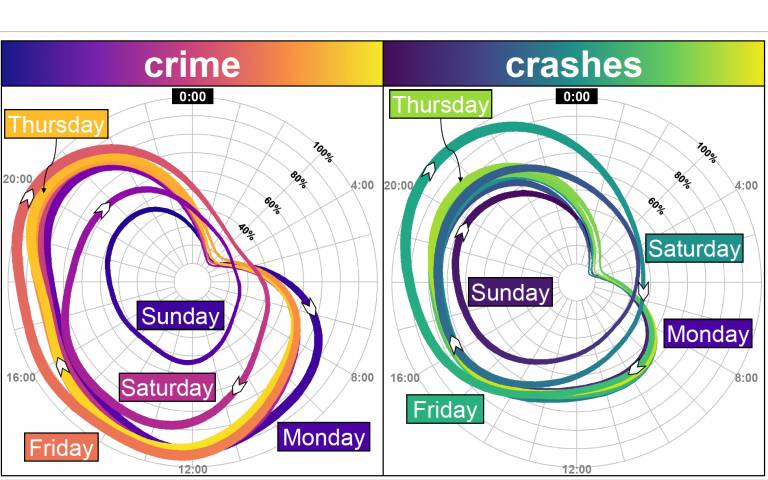 Experts analysing crime and car accident data in Mexico City found a surprisingly high level of synchronicity between the two on a weekly cycle, suggesting that applying more resources to prevent road accidents would improve crime rates by enabling more efficient policing.
For the paper, published today in Cities as Complex Systems special issue in PLOS ONE, experts plotted the time and locations of nearly one million car accidents and 200,000 violent crimes from January 2016 to March 2020 in Mexico City, creating a ‘heartbeat’ – so-called because of its resemblance to an electrocardiogram – of the city.

The pattern of crash and crime occurrences were similar day by day, repeating on the weekly cycle, the concept of which had previously been unexplored. Experts observed ‘valleys’ during the night and peaks in the evening, where at a city level, crime peaked at 7.5 times more than in the depth of valleys, and car accidents peaked at 12.3 times.

Crime and road accidents have been observed and analysed together before, but not in terms of cyclic behaviour. The team analysed both by capturing weekly occurrences of crime and accidents, using geotagged data capturing time and location. This created the heartbeat of the city.
This heartbeat was then analysed for a more specific location, relating to distance from the Mexico City Metro and other public transport stations, to create ‘tiles’ of the city. Nearby tiles were found to have similar heartbeats, in that they saw peaks and valleys in crime and crashes at similar times during the week. These peaks and valleys related to economic activities, such as residents commuting to work.
The team further observed that crimes and crashes reach their respective intensity peak on Friday night and valley on Tuesday morning. The mathematical method the team used can be applied to other cities.
Using the weekly cycle makes it easier to predict peaks and valleys in the near future, with potential implications on city policing. Whereas most cities have resources – albeit of differing levels – in place to tackle and prevent crime, road safety has had comparatively less resource attributed to it.
Dr Prieto Curiel added: “Focusing more on preventing road accidents would improve crime prevention in urban areas and give more resource to police tackling crime. Serious road accidents usually require the presence of police officers to divert traffic and secure the area.
“Unfortunately, due to the temporal synchronisation between crashes and crime, the times when more officers are engaged with road accidents is also when they are most needed due to the high levels of crime. Therefore, road accidents reduce the presence of police officers and could increase response time to other emergencies.”

Road accidents kill more than 1.35 million people around the world each year and 50 million people suffer non-fatal injuries in a crash. Three times more people are killed by cars than all types of crime and violence combined.
Additionally, crime and road accidents are becoming a more relevant urban problem. In Mexico, some of its cities suffer nearly twice the number of crimes per capita than the national level, so most of the urban population fears crime, In the US, for example, 54% of road accident deaths in 2018 occurred in urban areas, up from less than 40% in 2000.

Rafael Prieto Curiel, Juan Carlos Duque, Neave O’Cleary, ‘The heartbeat of the city’ is published in Cities as Complex Systems. You can read the Abstract below:

Human activity is organised around daily and weekly cycles, which should, in turn, dominate all types of social interactions, such as transactions, communications, gatherings and so on. Yet, despite their strategic importance for policing and security, cyclical weekly patterns in crime and road incidents have been unexplored at the city and neighbourhood level. Here we construct a novel method to capture the weekly trace, or \heartbeat" of events and use geotagged data capturing the time and location of more than 200,000 violent crimes and nearly one million crashes in Mexico City. On aggregate, our findings show that the heartbeats of crime and crashes follow a similar pattern. We observe valleys during the night and peaks in the evening, where the intensity during a peak is 7.5 times the intensity of valleys in terms of crime and 12.3 times in terms of road accidents. Although distinct types of events, crimes and crashes reach their respective intensity peak on Friday night and valley on Tuesday morning, the result of a hyper-synchronised society. Next, heartbeats are computed for city neighbourhood `tiles', a division of space within the city based on the distance to Metro and other public transport stations. We find that heartbeats are spatially heterogeneous with some diffusion, so that nearby tiles have similar heartbeats. Tiles are then clustered based on the shape of their heartbeat, e.g., tiles within groups suffer peaks and valleys of crime or crashes at similar times during the week. The clusters found are similar to those based on economic activities. This enables us to anticipate temporal traces of crime and crashes based on local amenities.