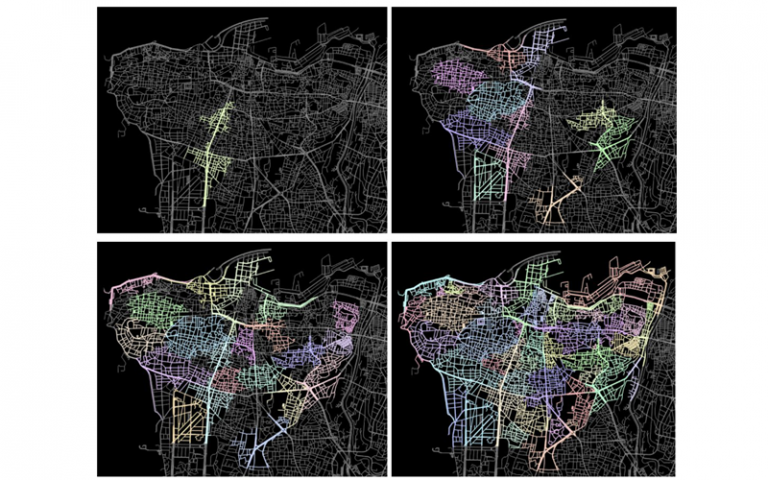 In order to understand the impact of the blast, up to date population figures are required. In absence of a census, they used Facebook Data for Good World Population dataset, which is generated in collaboration with  the Center for International Earth Science Information Network (CIESIN).  The dataset provided the population density for the whole of Lebanon in a gridded format. This was processed into usable data points, which were then overlaid against the boundaries of municipal Beirut.

The urban morphology aims to understand how neighborhoods in Beirut are structured. To derive these neighborhoods, the city’s road network was taken into consideration. Here, open-source data from OpenStreetMap was used to allow reproducibility of the results. Areas that contain a high density of road intersections within a specified distance were considered as individual neighborhoods. This allows the city to be divided into a way that may be considered more true to Beirutis’ lived- experience.

With the understanding of Beirut’s population distribution, their research then looks at how equitable essential urban facilities are distributed within the city. In particular, the ease of reach to health and education facilities are taken into account with respect to the average time required for Beirutis to walk to any given facility. The proportion of Beirutis required to walk more than 10 minutes to a hospital or school was taken to better understand the equity of distribution of these facilities. Subsequently, a spatial interaction model was formulated to understand the movement of populations within the city to take into account the size (and, therefore, attractiveness) of different hospitals. This model allows to estimate areas within Beirut that attract the most commuters, with the highest flows considered more accessible.

The LNOB (Leave No One Behind) presents the results of a qualitative study consisting of desk reviews and field observations, which included interviews with inhabitants and discussions with local and international NGOs.

The report concludes with an identification of key vulnerabilities in Beirut, post-blast. You can read more about the work here.

Melda is a doctoral researcher at the Centre for Advanced Spatial Analysis, UCL, London and the co-founder of Open Map Lebanon and. Her research is focused on extracting economic insights from satellite data. Melda is also a consultant at the World Bank where she’s been assessing global population exposure to flood risk. She’s also involved with ColouringLondon.org, a crowdsourcing project to get data on the urban built environment. Previously, Melda was a management consultant at Monitor Deloitte Middle East. She has a BA in Economics (Wellesley College), an MSc in Urban Economic Development (UCL), and an MRes in Spatial Data Science and Visualization (UCL).

Matthew is a postdoctoral researcher specialising in spatial data science at the City Futures Research Centre, University of New South Wales. He specialises in modelling urban processes and dynamics, as well as network analysis. His interests lie in the intersection of spatial data and its application in policy design and recommendations for the science of cities. He has worked in providing data analytics services and consultancy for several NGOs and national administrations. He has a BSc (Hons) in Biology. He obtained his doctorate from The Bartlett's Centre for Advanced Spatial Analysis at University College London.