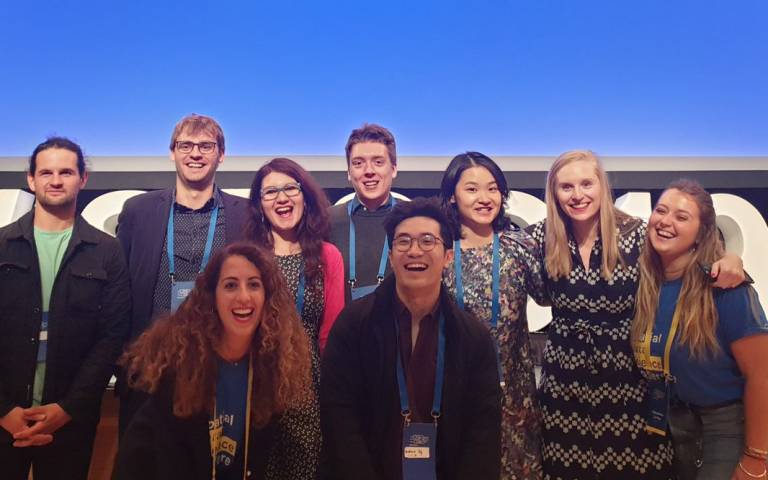 The conference, comprising workshops and presentations, was held at CUSP, NYU and Columbia University on 15 & 16 October, co-sponsored by CASA. Gathering colleagues from industry, academia and NGOs to share their experiences in the field, over 500 people attended, including colleagues and alumni from CASA including Maarten Van Hoof and Mengdie Zhuang who gave short talks, which can be viewed online here: https://spatial-data-science-conference.com/#2019videos

Mengdie's talk was on mapping for early warning sensing systems for infectious diseases. Maarten's talk was on spatial interaction models.

Maarten's blog on the conference can be read below:

On the morning of October 16th, Javier de la Torre, CEO of Carto took the stage on a huge podium at Coumbia University, New York City. A cycloon was predicted to hit the city that night, but anticipation of the 500 plus attendees was reserved for Javier's kick off of another Spatial Data Science conference. For a few years now, Carto has been organising meetings bringing together spatial data science enthusiasts from academia, business and ngo's alike. But this year, things seemed to have taken a serious flight. "We have surpassed the where question" stated Javier, "what we are really interested in right now is the why there". And Javier is right. Now that software to explore and map geo-spatial patterns has become ubiquitous, the real added value is shifting more than ever towards understanding why spatial patterns occur. Knowing the why, after all, will eventually lead you towards a better intervention. To optimise bus routes, or catchment areas for online shop delivery, to plan in starbuckses or white space market.

The field of spatial data science, of course, is much wider than the end applications just described. And it has been Carto's strong point to include the people behind all this technology, methodology, and theory in the discussion from the very beginning. Hackers, developers, data visualisation wizards, modellers, all were there, and it might come as no surprise that within such a crowd, our CASA academics felt very much at ease. After all, CASA has been about understanding the why of locations and communicating it to broader audiences for decades now. And so it seemed a no brainer that earlier this year, we decided to hold some workshop with Carto at UCL, to sponsor the SDSC conference, and to send some delegates to New York to represent us. With the treat of the cyclone now being very real,  our very own Mengdie Zhuang and Maarten Vanhoof took stage in the afternoon to present their work on, respecively, spatial patterns of epidemics and spatial interaction models, while in the crowd Bonnie Buyuklieve and Matt Kok Ming Ng met up with strangers and familiar faces in the likes of several of our alumni students. It was a wonderful day, and as the cyclone wept trough the city that evening, rumours could be heard about a SDSC edition in London, may 2019. No doubt the people in Carto will make this come true, no doubt CASA will be there to further spread the word.