CASA showcases our Internet of Things research in Montreal, Canada. 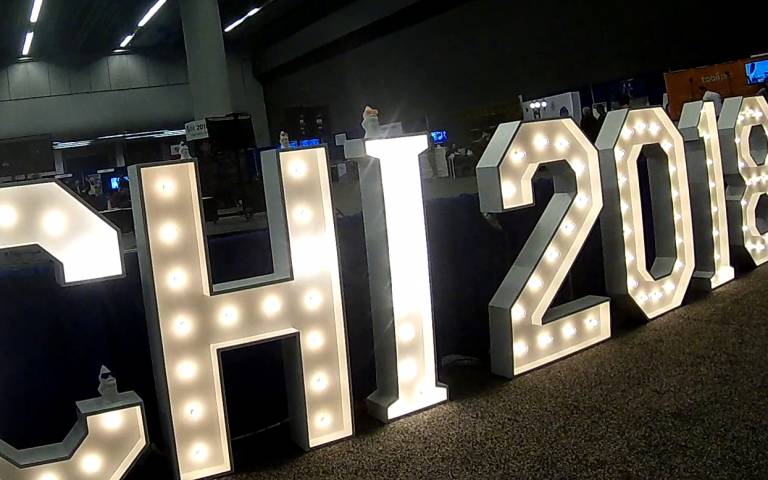 The IoT in the Park stream at CASA recently presented a poster in the Late Breaking Work section of the CHI 2018 conference in Montreal, Canada. The CHI conference is on “Computer, Human Interaction”, or in this case, human, gnome interaction as the title of the paper is, “Talking to GNOMEs: Exploring Privacy and Trust Around Internet of Things Devices in a Public Space”. 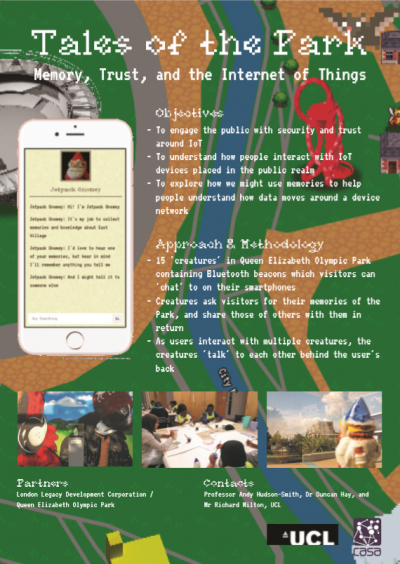 This work is based on the deployment of 15 3D printed creatures in the Queen Elizabeth Olympic Park in London. We made 7 gnomes, 3 bats, 2 honey bees and 3 otters and left them at various location around the park for people to talk to using their mobile phones. The theme of this year’s CHI is “engage”, which is exactly what we were attempting to do with the visitors to the park, by asking them to leave us their memories. However, this is a “leaky” memory device, as the gnomes might then tell the memories to other people who interact with them. All of this is made clear to the users beforehand by the gnome chatbot, so they are fully aware that anything they say might get repeated to others. The paper details the development and deployment of the gnome devices and the problems we encountered. At the time, only a small amount of analysis of the text and memories had been performed, but the paper highlights some of the more interesting memories left by the users.

You can view a short video about the project here.

Talking to GNOMEs: Exploring Privacy and Trust Around Internet of Things Devices in a Public Space

Privacy issues can be difﬁcult for end-users to understand and are therefore a key concern for information-sharing systems. This paper describes a deployment of ﬁfteen Bluetooth-beacon-enabled ‘creatures’ spread across London’s Queen Elizabeth Olympic Park, which initiate conversations on mobile phones in their vicinity via push notiﬁcations. Playing on the common assumption that neutral public settings promote anonymity, users’ willingness to converse with personiﬁed chatbots is used as a proxy for understanding their inclination to share personal and potentially disclosing information. Each creature is linked to a conversational agent that asks for users’ memories and their responses are then shared with other creatures in the network. This paper presents the design of an interactive device used to test users’ awareness of how their information propagates to others.