CASA researchers are working with young people in Colombia to identify and analyse the ways in which they experience their local urban environments. 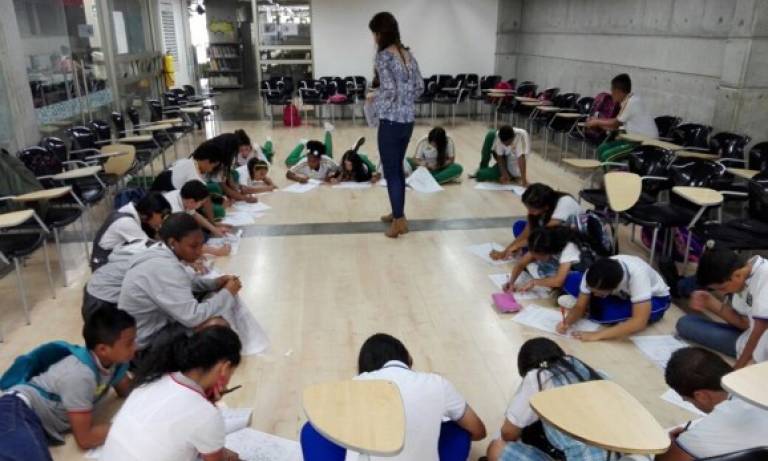 During March and April 2017, five workshops were held in Medellín, Colombia to identify the places that young people recognise as most important in their daily lives. The research aims to further analyse these results in relation to network morphologies and space syntax measurements.

The participants looked at maps of the neighbourhoods of Medellín - designed by researchers working on the CASA research project, ‘Visualizing Community Inequalities’ (supported by the Leverhulme Trust) - and used a set of graphic icons to indicate their feelings and perceptions about the various landmarks of the city.

The icons were used by 175 participants from 17 schools located in two districts of Medellín (Belen and San Javier). In order to expand upon these descriptions, other symbols representing environmental and security threats were also provided. At the end of the workshops, each of the participants was able to identify and describe different landmarks at a global and a local scale, and to interpret the graphic icons according to their own experiences.

Dr Jamie O’Brien and Laura Garcia are looking forward to comparing the social and spatial inequalities among neighbourhood communities in Medellin and Liverpool and to analysing the applicability of the prototype iconographic tool for deliberation in urban domains.

For the time being, the youth organisations and libraries (Sistema Bibliotecas Públicas de Medellín) that collaborated with us in Medellin are planning to use the method to map other social dynamics in the territory (e.g. the presence of social actors in each district). In a city such as Medellin, social cartography methods become important in the recovery of historical memory as well as in improving social and spatial equality.

Laura would like to recognise the valuable contribution of staff from the Parque Biblioteca Prebístero José Luis Arroyave San Javier and the Parque Biblioteca Belén, Biblioteca Pública Comfenalco Centro Occidental, as well as the youth organisation Red de Personeros y Líderes Estudiantiles de Belén who provided support in the design and validation of the maps and graphic icons, and the planning and implementation of the workshops.

In gratitude to the collaboration of these institutions, the researchers offered training to the staff of the libraries and to the teachers of the participating schools. The training included a brief introduction of the applications of cartography as an educational tool, and practical exercises for the visualisation and elaboration of maps using free software (Google Earth, QGIS & CARTODB).

We are hoping to see the community adaptating the methodology as the project develops, using GIS in their mapping activities.