Valerio is an architect and urban sensory researcher at CASA. 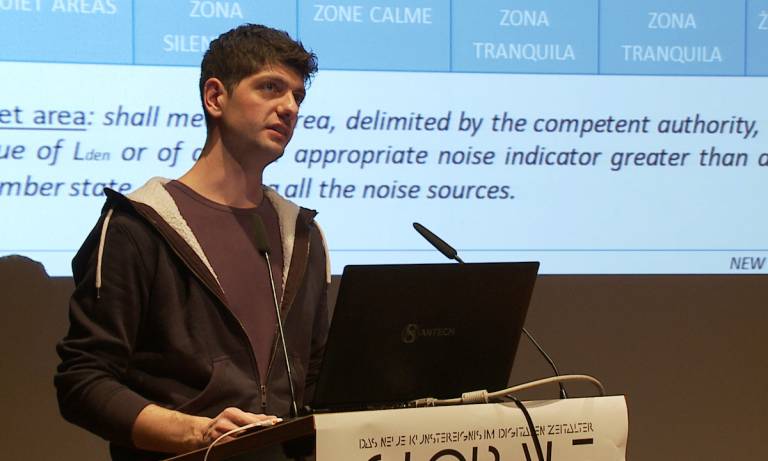 Valerio joined CASA in 2016 as Research Associate on the project “Future Cities, communication of near real-time data within a 3D modelling environment using online, augmented and mixed reality methods” in partnership with Future Cities Catapult. He is currently investigating the potentialities and limits of virtual and augmented reality devices in visualising real time urban datasets on the future UCL East Campus at the Queen Elizabeth Olympic Park. He is also involved on the research project Capstone, focused on the use of Internet of Things devices in The Queen Elizabeth Olympic Park, in collaboration with Intel, UCL, Imperial College and Future Cities Catapult. Valerio is a member of the International Network Ambiances.

My research focuses on sensory urbanism, specifically on the multisensory integration between visual and auditory modalities and how this integration affects the behaviour of city-dwellers, and on digital urban representation and simulation tools for visualising urban data sets in their temporal, sensory and spatial peculiarities. In other words, to understand how tools and devices, also developed in disciplines not directly linked with the urban studies, allow us to reveal and describe the everyday users’ experiences in the urban atmospheres through experiential simulations and multimodal representations.

Together with other colleagues at CASA, I am working on the development of ViLo (Virtual London platform for real-time data visualisation). In a nutshell, ViLo is an interactive platform that allows us to visualise, in real-time, spatio-temporal urban data sets and to conduct urban analyses in a digital and responsive environment. These urban data sets are retrieved from public API services or provided by the users. A specific emphasis was put on the representation of the city of London and on its public transportation system: for example, we can visualise in real time, in a digital and interactive representation of London, the positions of buses and trains on the transport network as well as the number of available bikes at the Santander bike sharing docks. In addition, the ViLo platform integrates other data sets such as the real-time weather information from Wunderground’s API that affect the visual aspect of the digital model, a Mapbox extension for calculating the walking routes, and a three dimensional visualisation of Flickr's images. Finally, the platform can be used to conduct real time analysis, such as two-dimensional and three-dimensional visibility analysis.

The platform has been developed, and it is now being tested using different virtual and augmented reality devices such as the head-mounted display HTC Vive, the Google Daydream, and the augmented reality system ARKit, recently published by Apple.

What is your favourite thing about CASA?

It is an amazing research environment, it is difficult to pick up just one favourite thing! But if I have to choose, I like how interdisciplinary research projects and unexpected collaborations give you the (quite unique) opportunity to broaden and push forward your research, your ideas and your intuitions.

Where can people find out more about your work?