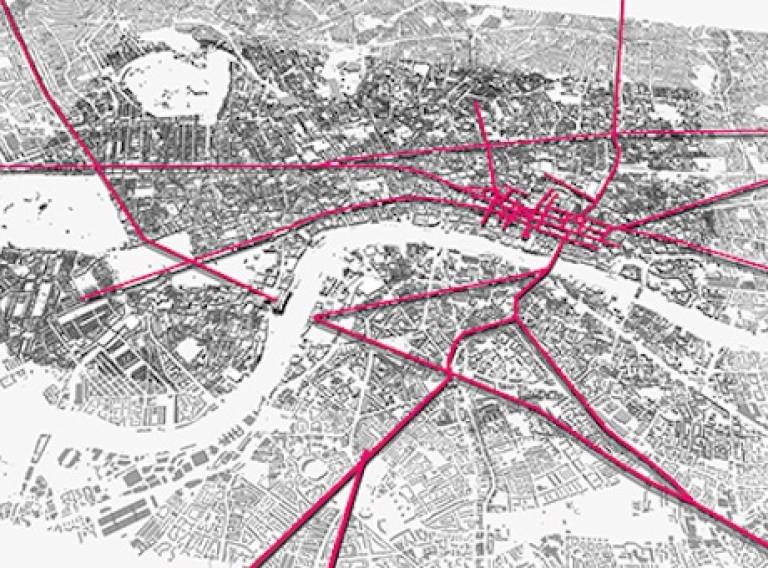 Produced by the Bartlett Centre for Advanced Spatial Analysis (CASA), the London Evolution Animation narrates the history of London from the Roman times of Londinium until the present day. The animation maps the development of the city through the evolution of the road network and preserved buildings, by visualising geo-referenced historic datasets.

Originally created for the English Heritage's Almost Lost exhibition, the animation was built with the purpose of communicating to a broader audience the extent of preserved features in the Greater London area, with the intent to inform the debate on the future protection of the historic fabric, and the role of this fabric in relation to new development within the capital.

The animation has exceeded 200,000 views within the first week of release and has been featured in the Guardian, Atlantic cities and Daily Mail. According to these, among the interesting facts revealed in this video is the “profound effect of historic events on the city’s built environment” and that “the greatest preserved feature of the city is its own urban fabric”.

The project was created by a team of people based on data from different sources. Dr. Kiril Stanilov, who was a Marie Curie research fellow at CASA and is now at the Centre for Smart Infrastructure and Construction at University of Cambridge, provided road network data spanning from the 18th century until today. The Museum of London Archaeology (MOLA) collected data regarding the evolution of the road network from the Roman times through the Medieval period. Information on all 156 scheduled buildings and 19,000 listed buildings/structures in London was provided by The Heritage Data Management Team within English Heritage’s Designation department and is available online through The National Heritage List for England. Information on Tudor London was derived from 'a Map of London 1520', published by the Historic Towns Trust. The animation was built by Flora Roumpani for CASA and directed by Polly Hudson on behalf of English Heritage

To find out more about the animation visit;