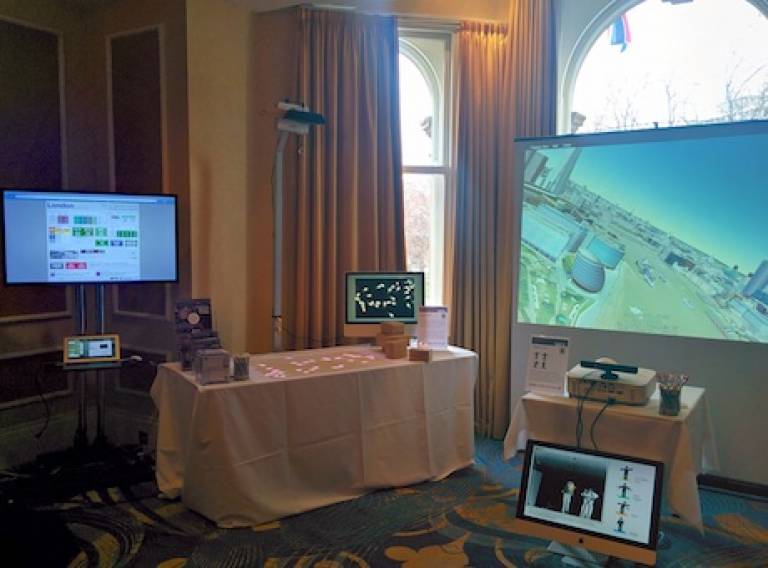 On Monday 17th March CASA researchers Richard Milton and Steven Gray showcased CASA’s exhibits at the 2014 Atkins Innovation Expo. The focus of this year’s expo was on innovation and encouraging new thinking. The event brought together the top 120 individuals from across the Atkins UK and European Business, led by David Tonkin (UK and European CEO). Atkins is an engineering and project management consultancy. Visit http://www.atkinsglobal.com/ for more information.

The CASA exhibits included at the expo were: Pigeon Sim, CityDashboard, London Data Table, Roving Eye and a 3D Twitter Topography. All exhibits were very well received and provoked many questions and discussion.
The Innovation Expo aimed to broaden people’s awareness of the approaches taken to innovation across the industry, highlight companies big and small who are leading the way, and further ideas in development. 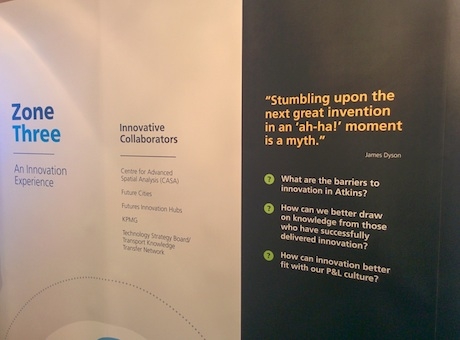 The event was split into four zones, with CASA in zone three, titled “An Innovation Experience”. Delegates each spent 40 minutes looking at the exhibits in each of the four zones, where they could fly the Pigeon Sim around London, watch real-time data projected onto the London Data Table, or interact with the Roving Eye agent based model. Possibly the record for the longest Pigeon Sim flight so far was City Hall to Heathrow (when we eventually found the airport), and trying to land while tracking a real flight on the London Data Table as it landed at Heathrow. Watching how people interact with the exhibits is always interesting and we took away some new ideas for future work.