The GMap Image Cutter is an application designed to take any image or digital photo and cut it into tiles which are displayed on a Google Map. 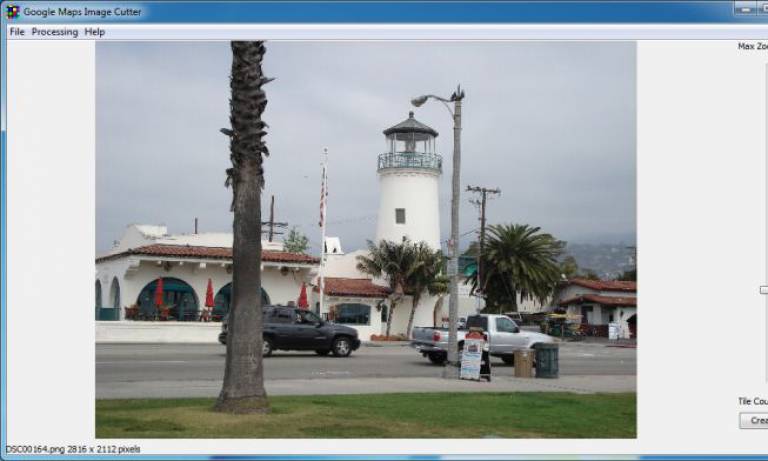 Using this tool, large images can be published on the web in a format that allows the user to pan and zoom using the standard Google Maps interface. Although publishing large digital photos is the most obvious application, this technique can also be used for annotated maps of an area that are not to scale e.g. directions for how to get to the office.

If you wish to use GMap Image Cutter software for other than academic or non-commercial personal purposes - including without limitation, on behalf of commercial or government organizations or entities - you must purchase a standard fee-bearing licence.

A partial panorama taken from a hotel window in Sapporo, Japan

The GMap Image Cutter takes a large image and cuts it into lots of 256x256 pixel images. At the top level there is only one 256 pixel square which is a smaller copy of the original image. At the next level, there are four 256 pixel squares, then sixteen, sixty four and two hundred and fifty six. This corresponds to 256, 512, 1024, 2048 and 4096 pixel square images spread over the map tiles. The application automatically chooses the depth of the maximum zoom level to correspond to the original size of the image, so zooming in any further would make the image bigger and cause it to pixelate.

More detailed information can be found in the readme file installed with the application.

For additional support email support@casa.ucl.ac.uk The GMap Image Cutter is part of the GENeSIS project at CASA. This project is sponsored by the ESRC as a node in the National Centre for e-Social Science.