ARCADIA: Adaptation and Resilience in Cities 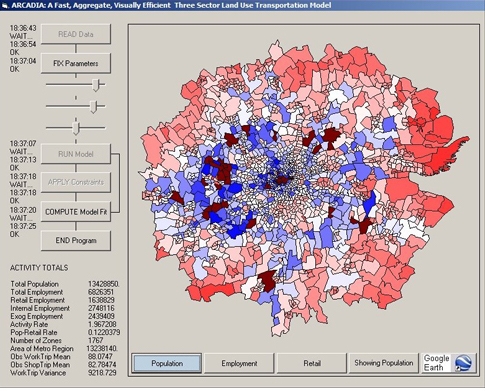 Urban areas are concentrations of vulnerability to climate change. Examples of impacts of climate change in urban areas include excessive heat, water scarcity and flooding.

Whilst it is impossible to attribute individual extreme events to climate change, recent events including the 2003 heat wave that struck Paris and other European cities, and hurricane Katrina in New Orleans have illustrated the potential for large scale weather-related disruption of urban function, from which it may take months or years to recover.

In recognition of the significance of climate change in urban areas, from the points of view of both adaptation and mitigation, in 2005 the Tyndall Centre for Climate Change Research launched a new research programme on "Engineering Urban Systems". Building on the previous success of the Tyndall Centre in interdisciplinary integrated assessment, the Tyndall Centre Cities Programme brought together research expertise from seven universities (four of which are represented in the ARCADIA project) and a high profile stakeholder group to develop an Urban Integrated Assessment Facility (UIAF) that simulates long term changes in urban areas and can be used as a platform for testing the effectiveness of adaptation and mitigation strategies.

The ARCADIA project will launch an ambitious new phase of development of the Tyndall Centre UIAF in order to understand better the vulnerability and resilience of urban areas.

The ARCADIA project is highly interdisciplinary and involves input from an influential group of stakeholders from business and local and central government, with interests in planning, infrastructure, the built environment and climate change adaptation and mitigation. This group will work with the research team to ensure that the project is orientated towards user needs. Indeed the first research task will involve close work with stakeholders to understand how the advance modelling tools being developed in the Tyndall Centre can best inform decision making.

The project runs from September 2010 to September 2012 and is supported by EPSRC as part of wider consortium run by Jim Hall at Oxford University.

The ARCADIA project is divided into 6 tasks that define the various impacts of the project: