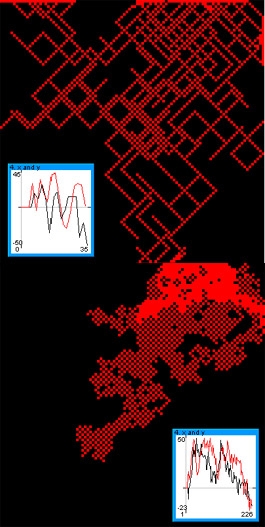 Agent-based models (ABMs) are currently being widely developed that deal with much finer spatial scales than hitherto where activity is represented at the level of the individual or agent. Dynamic processes enter these systems naturally as individual behaviour which at this level is inevitably mobile in a spatial context. The best developed models are those that deal with traffic and pedestrians but we are developing models that take cellular systems at the aggregrate spatial level and add individual motion to the cells as agents and institutions. These latter models are called Cellular Automata (CA).

We have various models of urban development based on agents. With Yichun Xie in Michigan, we  are modelling the residential developer process based on developer decision-making and we have developed such models for Suzhou in China and Detroit in South West Michigan. These models have grown out of the DUEM model which was developed to simulate urban sprawl in the Ann Arbor region. We have also integrated such CA models with GIS and developed applications for Chiang Mai in Thailand.

Our focus on agent-based models follows three foci: first pedestrian modeling of fine scale movement in restricted spaces such as shopping malls and there we are developing models for town centres and shopping districts for both wide and small areas. We have models of Covent Garden and kings Cross being developed which build on our previous application in Notting Hill and on the work of Intelligent Space with their London Pedestrian model.

Second, we are working with agent based models of residential segregation at the level of districts and census tracts and there are projects embedding such models within the wider framework of GIS.

Third we are working with how such models can be implemented on networks which enable diffusion to take place and we have applications to disease transmission in Portugal.

Currently we are making use of the RePast software as well as various map tools with many applications being written in Java and C++.