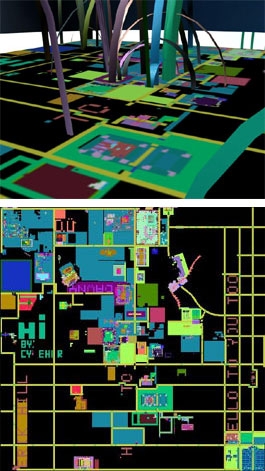 Much of this was based on Andy Hudson-Smith’s PhD research and some of it on the VENUE project. The 30 Days project involved our first demonstration of this technology for participants outside CASA across the world in general.

The following is from the project when it was started in 1998: “Using the virtual worlds server, ActiveWorlds, a virtual world named CVDS – Collaborative Virtual Design Studio – has been created and is free to anyone who has internet access. In this world you are given the ability to build freely. The aim of opening this world to anyone is to explore and log the growth of networked virtual space. The world was originally opened for 30 days, on the 30th November 1998 at 12.00 VRT (Virtual Reality Time) and over this time, data was logged every 24 hours, creating a unique insight into the growth of the virtual space.”

”Due to the success and interest in the 30 Days Project and the ‘community’ which had grown in the world, it was decided to continue with the research for a period of 360 days. During this time, a Virtual London will appear in the World. This project is aimed at being one of the first true multi-user virtual cities existing on a low bandwidth network. Using a variety of media, three dimensional models of London buildings will be placed in the world, hotlinked to geographical and spatial information. Virtual London will co-exist with the existing buildings in 360 days and the world will remain open to all members of the community.”
A good write up of 30 Days is in Andy's PhD thesis:

thesis.pdf
In fact, the media pages for the 30 Days project are still online but some of the links are broken.

Virtual London of course has been built in many forms since Andy first developed this application. Click here for some of our current work.