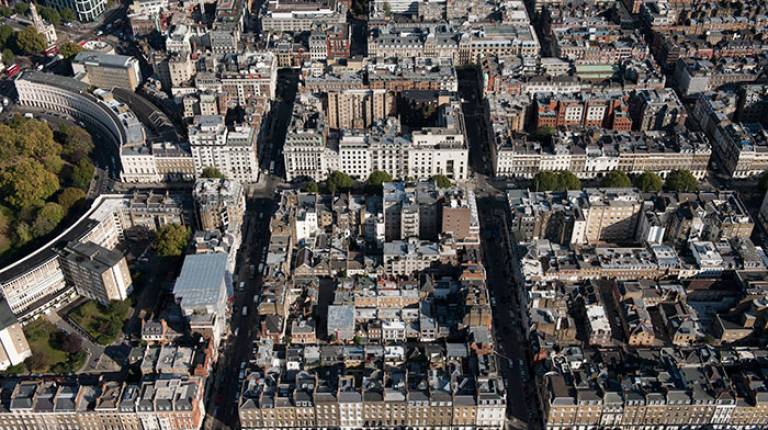 In the autumn of 2017 the Survey of London published two volumes covering a large swathe of the parish of St Marylebone, an area comprising much of the West End north of Oxford Street, otherwise bounded by Marylebone High Street and the Marylebone Road, west and north, and Cleveland Street and Tottenham Court Road to the east. Much of this land falls within the Howard de Walden Estate (formerly the Cavendish-Harley then Portland Estate), with whom we have worked closely, making extensive use of their archives.

In November 2018, the Survey was honoured to received the prestigious Colvin Prize from the Society of Architectural Historians of Great Britain in recognition of the volumes as an outstanding work of reference on an architectural subject.

South-eastern Marylebone is rich in history and the area includes some of London's most celebrated addresses, including Cavendish Square, Harley Street and Portland Place. Buildings in the area were few until the 1720s, when the Harley family oversaw the laying out of streets around Cavendish Square on a grid pattern. The grid grew gradually, work hastening after 1760 to fill the ground with houses by the end of the century. At the east end of the study area, similar development took place on the small Berners and Evelyn estates. A humbler enclave to the south-east, close to present-day Tottenham Court Road Station, was laid out by Major John Hanway RE in the 1720s.

Among the important individual buildings and architectural set pieces in the area are the Adam brothers' development of Portland Place, where the Royal Institute of British Architects' Headquarters is a notable twentieth-century insertion, Marylebone Parish Church, All Saints Margaret Street and, on Langham Place, All Souls Church, the Langham Hotel and the BBC's Broadcasting House.

As part of our study, we considered the area's relationship with the medical profession and hospitals, for instance on Harley Street and at the vast, recently demolished Middlesex Hospital. We also focused on the premises of the clothing industry and motor trade around Great Portland Street and Mortimer Street, and looked at the community of artists concentrated between Tottenham Court Road and Great Portland Street during the eighteenth and nineteenth centuries.

Oxford Street, with its uniquely important and long-lived shopping history and great department stores, will be handled separately in a third and subsequent volume.

A fly-through visualization of the Oxford Chapel, Vere Street, showing the church as altered in 1820. This visualization was produced by Andy Crispe of Historic England to complement Survey of London investigations in South-East Marylebone.

"The story told here is much more than an account of street plans and of buildings and their owners and occupiers: it amounts to a rich micro-history of a relatively small portion of London over three centuries, throwing new light not only on the area covered but on the progress of urban development in general." - Geoffrey Tyack, The Georgian, December 2017.

"If you have six or seven feet of shelf space spare, I should if I were you give up expensive shop-bought coffee for a year or two and buy the whole [Survey of London] series. Or, since it gets better and better, work backwards, starting with South-East Marylebone." - Christopher Howse, The Telegraph, October 2017.

Read Christopher Howse's full review of Volumes 51 and 52, South-East Marylebone, in The Telegraph.

Draft chapters of Volumes 51 and 52

In advance of a full online version of Volumes 51 and 52 of the Survey of London, on South-East Marylebone, the draft chapters have been made freely available online.

Image: The Portland Place area from the west in 2011 (Historic England, Damian Grady)

Survey of London Volumes 51 and 52 on Yale Books

Oxford Chapel 3D reconstruction (as in 1820) from Survey of London on Vimeo.