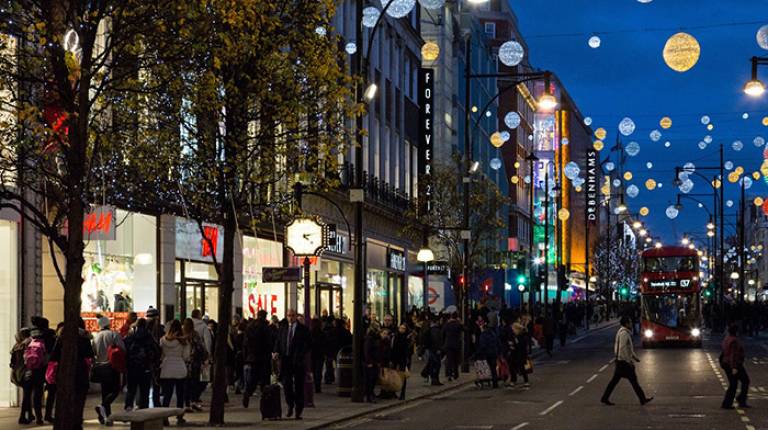 The Survey of London has followed up its two volumes on south-eastern Marylebone with a comprehensive study of Oxford Street, taking the form of a linear volume covering both sides of the street from Tottenham Court Road to Marble Arch. The volume was published in April 2020 by the Paul Mellon Centre for Studies in British Art.

As the longest continuous shopping street in Europe since the eighteenth century, Oxford Street is a unique phenomenon. Though it has witnessed almost continuous change, it has never lost its popularity. It has been home to many of the great London department stores, some still flourishing like John Lewis and Selfridges, others once-familiar names like Bourne & Hollingsworth, Marshall & Snelgrove, Peter Robinsons, and Waring & Gillow. Its architecture varies from the magnificent to the ephemeral, and from small-scale boutique interiors and glittering Victorian glasswork to the elegance of James Wyatt’s long-lost Pantheon and the monumental colonnades of Selfridges.

The traffic, the crowds and the means of transport are an equal part of the Survey’s study along with the buildings and shops of Oxford Street. The road itself goes back to Roman times, and was long famous as the processional route along which criminals were taken to Tyburn for execution. To explain how the street evolved into the present raffish shoppers’ destination, familiar the world over, has required all the Survey’s powers of research, synthesis, illustration and description.

"Volume 53 of the Survey of London is a bravura exercise in social and cultural history, topography and architecture..." - Gillian Darley, The Guardian, April 2020.

"This is a magnificent book at every level... an exemplary record of arguably the most important street in London, part of the historic ceremonial route from Newgate (with its prison) to Tyburn (with its gallows), and of course the road leading to Oxford... Erudition worn lightly complemented by an illustrative treat, the volume cannot be recommended too highly." - Paul Finch, Editorial Director of The Architects' Journal, April 2020.

"Oxford Street is not the obvious candidate for an architectural study. Who, after all, lingers any longer than they have to in London’s worst thoroughfare? Yet this brilliant volume traces the development of modern retail, the architectural ambition, the lost masterpieces and the sheer eclectic verve of the West End’s premier avoidable site. The latest volume in the exhaustive and consistently brilliant survey of London, there is nothing quite like it." - Edwin Heathcote in The Financial Times, June 2020.

In advance of the publication of Volume 53 of the Survey of London, on Oxford Street, the draft chapters have been made freely available online. 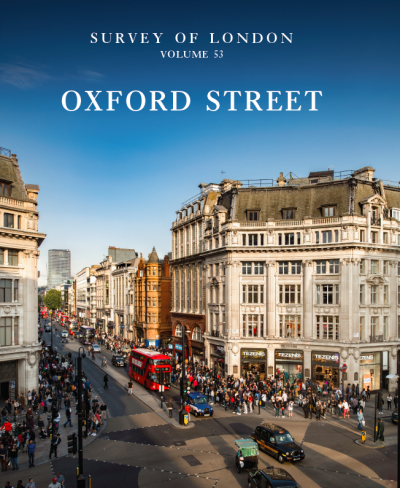 Survey of London, Volume 53, Oxford Street, edited by Andrew Saint and published in 2020 by the Paul Mellon Centre for Studies in British Art. Link to the volume on Yale Books.