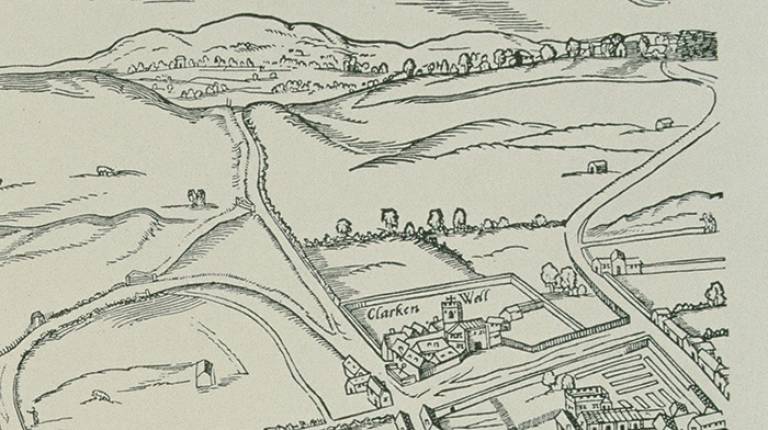 A wide area, Clerkenwell extends from the 'village' centre around Clerkenwell Green as far as the Angel and the fringes of King's Cross, and includes all the streets and squares between Goswell Road and Farringdon Road. Though complementary, two Survey of London volumes are self-contained and available separately.

South and East Clerkenwell focuses on the older-developed parts, centred on Clerkenwell Green and Clerkenwell Close. Tracing the story of this tightly knit, multi-layered area, it relates the social, political and economic transitions, from its medieval monastic origins to its recent emergence as a location for the architecture and design professions, and loft living.

Northern Clerkenwell and Pentonville deals with the more spaciously planned streets north, from Exmouth Market and Rosebery Avenue. The story here is dominated by Georgian house-building, including the now largely vanished Georgian suburb of Pentonville and the elegant villas of the Lloyd Baker and New River Company estates around Amwell Street.

It also looks back to the New River Head, a vital component in London's water supply, as well as the spas, wells and pleasure grounds, including Sadler's Wells Theatre, the last survivor of the old places of entertainment. And it looks forward to the twentieth century, with its public housing construction - including Lubetkin's Modernist masterpieces, the Finsbury Health Centre and Spa Green Estate.

"These superb scholarly volumes ... should be bought by anyone who loves the multi-layered fabric of London." - Clive Aslet in The Telegraph, June 2008.

Read Clive Aslet's full review of Volume 46, South and East Clerkenwell, and Volume 47, Northern Clerkenwell and Pentonville, 'A Monumental Survey of London' in The Telegraph.

"A monument of serious publishing and a credit to the city. It should be compulsory reading for any aspiring Mayor of London."  - Andrew Whitehead in History Workshop Journal, July 2008.

"the most ambitious [volumes] of all those in the Survey to appear so far ... fascinating to look at, absorbing to read, as detailed as one could wish for, rich in anecdote and personalities, and absolutely impeccably produced." - James Stevens Curl in Perspective, July 2008.

"The volumes are undoubtedly the best yet to have been produced by the Survey of London." - Chris Ellmers in LAMAS Transactions, 2008.

"Words fail accurately to describe my amazement about the quality of the two new volumes: incredibly comprehensive, thoroughly researched, superbly illustrated and a joy to use - the highlights of our conservation and design library."  - Michael Asselmeyer, Acting Principal Conservation and Design Manager, Environment & Regeneration, London Borough of Islington, August 2008.

Image credit: Clerkenwell Green and vicinity in the 1560s (Facsimile of the c.1603 edition of the 'Agas' map)