The project, led by AUAR Labs and Knowle West Media Centre in collaboration with local residents, is among twenty in the shortlist, and is open to a public vote. 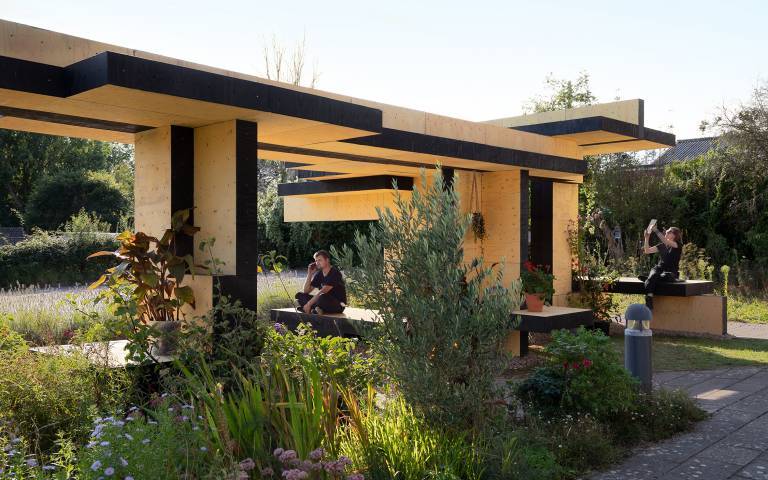 Now in its 26th year, the award recognises smaller, lower-budget architecture in the UK or designed by a UK-based architect, focusing on completed projects with a contract value up to £299,000. Nearly 200 projects were submitted to the competition. Previous winners have included David Leech Architects, Kate Darby Architects, Carmody Groarke, Haworth Tompkins, Hawkins\Brown, Mole Architects and Chris Wilkinson.

Launched in September 2020, Block West was a temporary pavilion with associated public programme that explored how new forms of collaboration between designers, technologists, architects and community-led arts organisations can enable communities to reclaim local housing production. The project was a collaboration between The Bartlett School of Architecture’s AUAR Labs, citizen-led digital arts organisation Knowle West Media Centre and community members of Knowle West in Bristol.

Block West used an arts-led co-creation methodology that placed local residents’ lived experiences and participation at the heart of local housing production, enabling them to gain skills in designing the kinds of spaces they need. The approach included a workshop series with local residents exploring the potential of new digital tools, e.g. accessible web-based digital design applications and digital fabrication technologies in the design, fabrication and assembly of housing. Block West uses AUAR’s lego-like modular building system Block Type A. The system can be assembled and reassembled together in a variety of ways, offering a wide range of possibilities for designing adaptable community-led spaces.

Pre-fabrication and assembly of Block Type A requires very little specialised tools or expertise, making the system accessible to everyone. The project offered equitable and inclusive opportunities, creating 25 part-time jobs filled by the community throughout the project. This job creation programme was both a test bed and training programme for embedding digital skills in the local community.

The final structure measuring 38sqm consists of 145 plywood timber blocks made of CNC cut sheets milled by KWMC’s digital manufacturing hub The Factory, and assembled into the prototype on a plot outside KWMC by a team of local residents in just 10 days. Open until Spring 2021, Block West serves as an outdoor community hub, and has been used as space for artist residencies and events.

Engineering was provided by Manja van der Worp and Yoav Caspi of YIP Engineering.  The project was made possible by funding from a Transforming Construction Network+ research grant.

The winning project will be decided by a panel comprising four judges: Fiona Scott, director at Gort Scott architects; Pedro Gil, director at Studio Gil/Senior Fellow at The Bartlett School of Architecture; Selina Mason, director of masterplanning at Lendlease; and Martin Edwards, director at Martin Edwards Architects, the winner of last year’s award.

The public are also invited to vote for their favourite via a reader’s poll, and AJ will also award a sustainability prize to one of the shortlisted projects. The awards will be held online at 12:30 on 22 April.