It has been a successful year for Bartlett staff and alumni, with an impressive range of projects winning RIBA National Awards 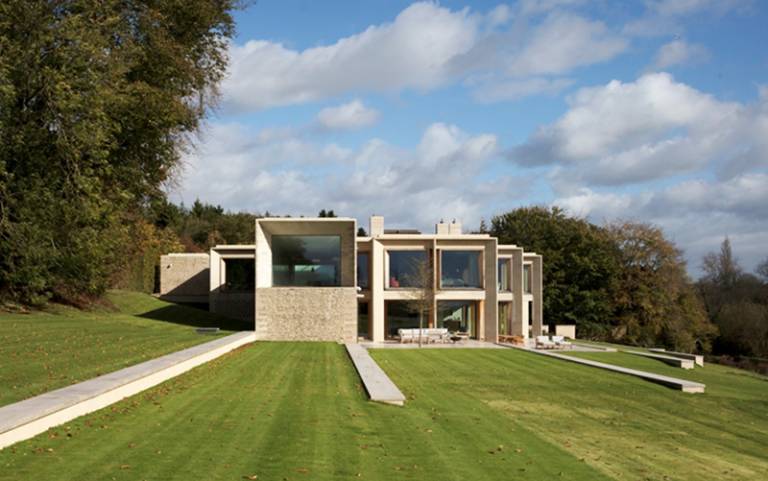 The RIBA National Awards are given to buildings across the UK recognised as significant contributions to architecture. This year's winners, announced on 27 June 2019, were selected from the RIBA Regional Award winners determined earlier this year.

Cork House, by Matthew Barnett Howland and Oliver Wilton
Bartlett alumnus Matthew and Bartlett lecturer Oliver, worked alongside Dido Milne on the project, which won a RIBA South Award and a RIBA South Sustainability Award, as well as a RIBA National Award. The biogenetic construction of prefabricated cork blocks and engineered timber is carbon negative at completion and has remarkably low whole life carbon. All the components can be reused or recycled, and the expanded cork blocks have been made using by-product and waste from cork forestry and the cork stopper industry.

Eleanor Palmer Science Lab, by AY Architects
The practice, led by Professor Yeoryia Manolopoulou, has won both a RIBA London Award and a RIBA National Award for their unique space in a Camden Primary School, designed to encourage childhood curiosity and wonderment in the science classroom. It is conceived as a ‘wonder room’; a cabinet of curiosities and a place for discovery and experimentation.

Hampshire House, by Niall McLaughlin Architects
Founded by Bartlett Professor Niall McLaughlin, the practice has won a RIBA South Award and a RIBA National Award for their project, Hampshire House. The house is arranged in a series of staggered pavilions which represent various members of the family, from childhood to later life. The structure uses a wide range of materials including coursed flint, Purbeck stone and untreated oak timber.

LAMDA, by Niall McLaughlin Architects
Niall’s practice has also won a RIBA London Award and a RIBA National Award for their development of a new site in West London for the London Academy of Music & Dramatic Art, complete with a state-of-the-art theatre, studio theatre and workshop spaces. The vast project took 8 years to complete from planning to transfer and then reoccupation.

Signal Townhouses, AHMM
The practice, founded by four Bartlett alumni, has won both a RIBA London Award and a RIBA National Award for their work on the Signal Townhouses in Greenwich, which contribute to the transformation of the area into a new high-quality urban quarter. The new homes successfully deal with the transition in scale from 2-storey Victorian terraces to multi-storey apartment blocks.

Television Centre, AHMM
The practice has also won a RIBA London Award and a RIBA National Award for the Television Centre at the BBC, which is the first purpose-built television studio in the country. Thee project has transformed the forecourt into a public space, preserved listed features such as the red gridded pattern of the central façade, created around one thousand new residential apartments and provided new workspaces interconnected by overlapping internal bridges – all which improve and reinforce connections with the local area.