An impressive range of Bartlett students, staff and alumni have won awards from the RIBA for projects spanning the country 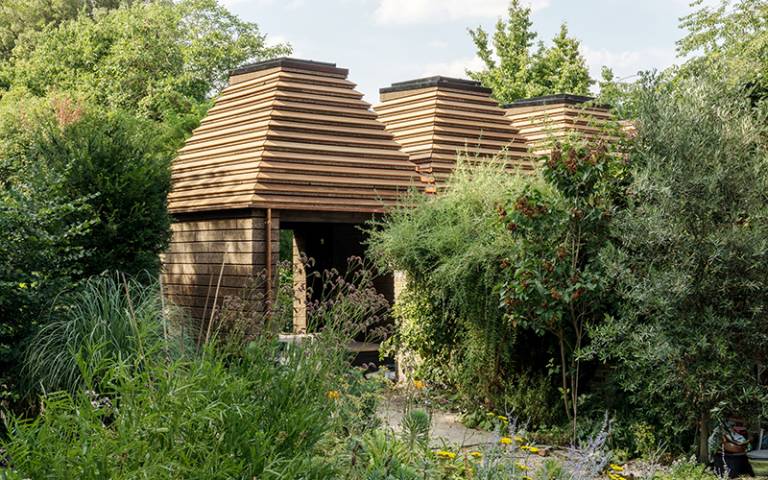 Matthew Barnett Howland and Oliver Wilton, Cork House
Bartlett alumnus Matthew and Bartlett lecturer Oliver, worked alongside Dido Milne on Cork House, which won both the RIBA South Award 2019 and RIBA South Sustainability Award 2019. The biogenic construction of prefabricated cork blocks and engineered timber is carbon negative at completion and has remarkably low whole life carbon. All the components can be reused or recycled, and the expanded cork blocks have been made using by-product and waste from cork forestry and the cork stopper industry.

AY Architects, Eleanor Palmer Science Lab
The practice, led by Dr Yeoryia Manolopoulou, has won an award for their unique space in a Camden Primary School, designed to encourage childhood curiosity and wonderment in the science classroom.

Niall McLaughlin Architects, LAMDA
Founded by Bartlett Tutor, Niall McLaughlin, the practice has won an award for the development of a new site in West London for The London Academy of Music & Dramatic Art, complete with a state-of-the-art theatre, studio theatre and workshop spaces.

AHMM, Signal Townhouses, Television Centre and The Bower
The practice, founded by four Bartlett alumni, has won awards for three projects; the Signal Townhouses in Greenwich, which contribute to the transformation of the area into a new high-quality urban quarter; the Television Centre at the BBC, which is the first purpose-built television studio in the country; and the Bower in Old Street Yard, which reinvents a collection of buildings from the 1960s and 1980s into a mix of workspaces, restaurants and shops.
Hawkins\Brown, Here East
With Bartlett alumnus Tom Noonan as project architect, this construction was seven years in the making and transformed the 120,000m2 innovation campus for a creative tech community. Our UCL at Here East facility overlooks the main internal boulevard, its own workshop space and the tech research lab.
Other winners of London projects include, alumni Jonathan and Katherine Pile for Crossfield Street House, student Nick Hayhurst for Torriano Primary School STEM Lab and alumnus Jelena Cousins for Kenwood Lee House.

Bartlett alumna Tamsin Green worked as an architect on two winning projects: Coal Drops Yard by Heatherwick Studio, which won a London Award, and Writ in Water by Studio Octopi, which won a South East Award.