Bartlett graduate Lok-kan Chau has been announced as joint winner of the Royal Academy’s Hugh Casson Drawing Prize for work currently on display at the RA’s 2017 Summer Exhibition. 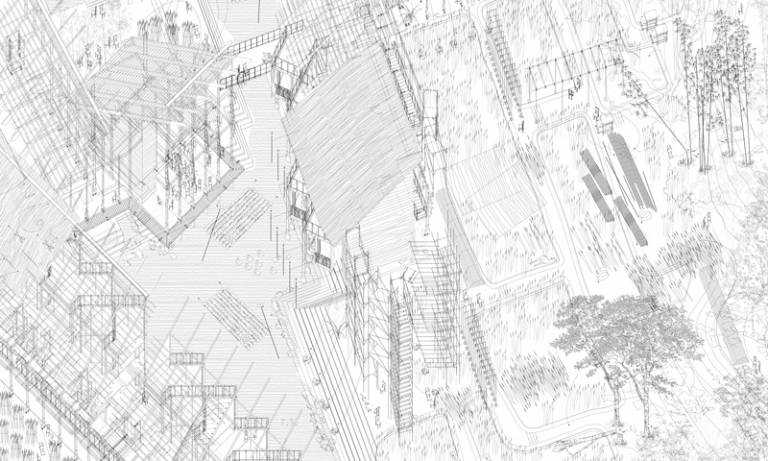 Lok-kan Chau, a recent graduate from The Bartlett’s MArch Architecture programme, has been awarded one of the Royal Academy’s most prestigious prizes at the 2017 Summer Exhibition: the Hugh Casson Prize for Drawing.

The prize is awarded annually for ‘an original work on paper in any medium, where the emphasis is clearly on drawing’. This year it was awarded to works by two individuals, with Lok-Kan receiving the major share.

Lok-kan’s drawing is from a project entitled ‘Construction Manual for Lantau Commune’, which explores a participative construction process. In his proposal, Lok-kan created a ritual that dignifies labour, reveals knowledge, and gathers people. He envisaged a community centre that evolves over time, echoing the impermanence of being.

Commenting on the news, Lok-kan has said how “thrilled and surprised” he was to receive the reward. He also said he hopes it will inspire him “to work even harder and to continue to challenge conventional, comfortable architectural practice”.

Originally from Hong Kong, Lok-kan Chau completed his Master’s degree at The Bartlett in 2016 as part of Unit 17, led by Níall McLaughlin, Yeoryia Manolopoulou and Michiko Sumi. His thesis was supervised by Jan Birksted.

The Royal Academy Summer Exhibition has been one of major annual highlights of British art scene since its inception in 1769. Held every June to August for the last 249 years, it is the world’s largest open-submission contemporary art show. The 2017 Summer Exhibition opened on 13 June and runs until 20 August 2017; it includes over 1,200 works in a huge range of artistic media.