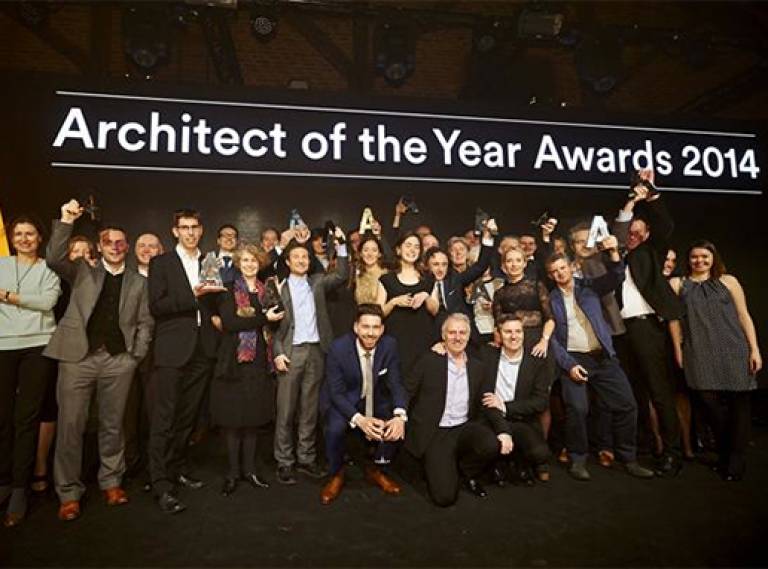 Congratulations to The Bartlett's Kerstin Sailer Director of Research and Innovation at SpaceLab, Peter Bishop Director of Allies and Morrison and Paul Bavister Associate Director at Flanagan Lawrence whose practices all picked up awards at the BD Architecture of the Year Awards (AYA) 2014.

Spacelab, who have worked on a number of projects with The Bartlett's Space Syntax Laboratory over the years including 'Big Data in the Office' led by Kerstin Sailer, were awarded 'Interiors Architect of the Year'. The judges noted a wide range of office schemes including a corporate HQ for Virgin Money in Edinburgh, a contemporary warehouse style conversion for Jaguar’s inhouse ad agency Spark 44 and a cheap and cheerful office for ad agency VCCP.

The 'Small Non-housing Architect of the Year Award' went to Paul Bavister's Flanagan Lawrence. The award recognises Flanagan Lawrence’s commitment and innovation towards small projects. The BD judges said: "...While temporary, the pavilions were thought to be imaginative and inspiring architectural objects whose flowing, sinuous forms complimented their attractive, naturally landscaped settings." Paul Bavister is a Teaching Fellow at The Bartlett School of Architecture.

Allies & Morrison, whose Director is The Bartlett School of Architecture's Professor Peter Bishop, received two awards: 'Masterplanning Architect of the Year' and 'Education Architect of the Year'. Their King’s Cross development was noted as a masterplan that has been seamlessly integrated into the surrounding London urban fabric and was flexible and adaptable enough to survive through the recession. While Ash Court at Girton College in Cambridge received special recognition as a superlative reinterpretation of historic cloistered and collegiate architecture on a sensitively yet assuredly designed contemporary building.