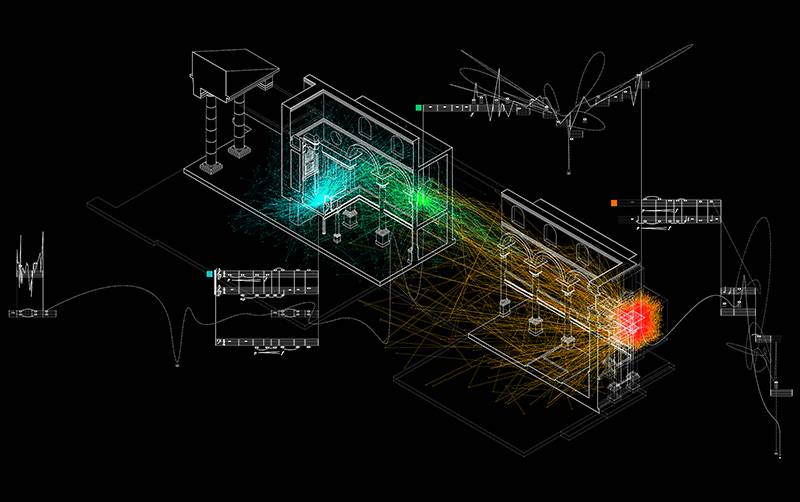 Historically, architectural space has played an active role in influencing the experience and composition of music. Renaissance composer Adrian Willaert is famed for having supposedly invented polychoral music in response to the spatially-opposed positioning of choir lofts in St Mark’s Basilica in Venice. Conversely, architects have long acknowledged the desires of music in space. Long before Acoustics was a formally recognised discipline, Roman architect and engineer Vitruvius discusses a method for enhancing the sonic character of performance spaces by embedding 'echea' (acoustic vases) in the walls. Despite these examples, only a small handful of spatiosonic practitioners have managed to rigorously explore interactive parallels between musical space and physical space in their work.

In contrast to the above examples, our experience of music is becoming more 'virtual', and divorced from a physical, spatial reality. We are increasingly inseparable from the portable technologies which enable us to create and consume media on demand whenever, wherever. A continuing trend towards 'virtual listening' results in a disconnect between the practices of designing spaces for music and composing music for live performance.

This research is explored through the composition and choreography of physical, musical performances. These performances are hypothesised, constructed and examined using a range of analytical analogue and digital techniques from predictive models of acoustic simulation, to interrogating the results of the performances through the analysis of ambisonic recordings, spatio-temporal drawings and audience feedback. The compositions are referred to as 'constructions' and each one establishes the terms by which sonic media and architectural space might influence each other. With these constructions, architecture is activated by musical desires. Simultaneously, music is composed and performed as a way of accessing and exploiting spatiosonic phenomena.

Emma-Kate is an architect, artist, musician and composer. She teaches on one of the Design Units for Architecture MArch at The Bartlett where she is also a PhD candidate on Architectural Design. Her research concerns the discovery and exploitation of creative reciprocities between music; as constructed sound, and architecture; as constructed space. Her spatial compositions have so far been performed at the Royal Academy of Arts, Shoreditch Church, the Sagrada Familia and the Southbank Centre. Her work has also been exhibited at the Royal Academy of Arts and the RIBA and has been published in peer-reviewed journals including Architectural Design, Design Ecologies and the Organised Sound Journal.

Image: Construction 001 – Sketch for a Spatialised Score, by Emma-Kate Matthews