The AMOPP group has a number of theoretical research programs including:

Please read below for more details.

The molecular theory group develops methods based on first principles quantum mechanics for  studying the structure, spectra and collision properties of molecules. Research in the group is a  mixture of studying fundamental problems such as ultra cold molecular collisions and electron and positron molecule collisions, and application of theoretical methods to key areas such as astrophysics and atmospheric physics, where as part of the CAVIAR consortium we are trying to determine the physical basis of the so-called water continuum. 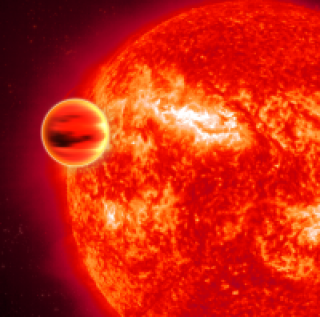 The image on the left shows an artists impression of extra solar planet HD189733b. Calculations by the molecular theory group led directly to the detection of water in the atmosphere of the hot Jupiter-like planet in 2007, the first molecule detected on an extra solar planet, see here for more details.

More information about our theoretical molecular physics reseach can be found on the molecular theory group webpages.

The formation of ultracold molecules is a new and rapidly developing area in the physics of quantum degenerate gases. The aim of our research is to theoretically understand the dynamics of the association of molecules and its interplay with the bulk motion in trapped Bose-Einstein condensates and quantum degenerate two component Fermi gases. The applications of our research are far reaching; they range from precise studies of two- and few-body ultracold collisions to the many-body physics of Cooper pairing of Fermions.

Our ongoing research includes topics such as: 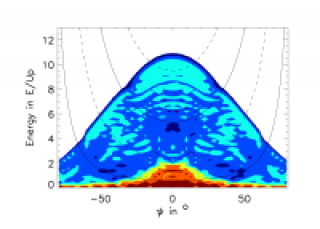 When atoms and molecules are exposed to extremely strong laser fields novel and exciting processes can take place. At UCL we have an ongoing program of experimental and theoretical work studying these processes such as above threshold ionization, high-order harmonic generation, electron recollision, and non-sequential double ionization. In recent years, understanding these processes has led to the possibility of using ultrashort laser pulses to image molecular processes on the attosecond timescale and the angstrom length scale simultaneously. The theory underpinning our understanding of these processes is being actively developed by Carla Faria, and Jonathan Tennyson is extending R-matrix methods to apply to these problems.