We kick off LGBTQ+ History Month at UCL Americas with an image of the blue plaque on our building at 51 Gordon Square, in the heart of Bloomsbury, suitably updated for this month when we mark and celebrate diversity at UCL and our Institute. 51 Gordon Square was indeed one of the abodes of British critic and biographer Lytton Strachey (1880-1932), a prominent member of the 'Bloomsbury Group'. Since 2012, this building, together with number 50, serves as the main office and seminar and lecture rooms cluster for UCL Institute of the Americas. Once life returns to normality, we will be delighted to host you there as our student, visiting staff or as a guest at one of our many public events.

UCL Institute of the Americas is a leading multidisciplinary specialist institution for the study of Canada, the Caribbean, Latin America and the United States. We offer the UK's largest programme of undergraduate, masters and doctoral degrees on the Americas. We take pride in our inclusive and diverse staff and student communities. 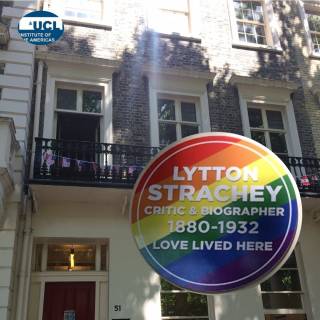 Dr Patricio Simonetto is currently Marie Skłodowska-Curie Fellow at UCL Americas and has been actively participating in the British academic arena since his arrival from Argentina in the autumn of 2020. He has convened a few events at UCL and is participating in at least three LGBTQ+ themed events at fellow institutions during the coming weeks. On February 4 he will be the guest speaker at Birkbeck College University of London, presenting 'A Body of One's Own: The Early Making of 'Sex Change' in Argentina, 1900-1930.' More information on this event here.

Video of 'A Body of One's Own: The Early Making of 'Sex Change' in Argentina, 1900-1930' with Dr Simonetto as guest speaker, by kind permission of Birkbeck College University of London

Dr Joshua Hollands is a Lecturer (Teaching) in United States History at UCL Americas. He is a historian of the modern United States with particular focus on sexuality, political economy, and social movements. His doctoral dissertation was titled: 'Work and sexuality in the Sunbelt: homophobic workplace discrimination in the US South and Southwest, 1970 to the present'. He is the convenor and facilitator of various UG and PGT modules, amongst which AMER0055: Intimate Matters: Histories of Sexuality in the U.S. and Beyond, 1945-present.

Back in July 2020 Professor Maxine Molyneux convened and chaired the event 'Sexing the Blue Tide: The Backlash against sexual and gender justice in Latin America' at which guest speakers Constanza Tabbush and Jonathan Bell analysed increasing references to the alleged dangers of ‘gender ideology’ in government speeches, statements from political institutions and policy measures, whilst coalitions of feminists, LGBTQ+ and pro-democracy advocates are taking to the streets in massive protests seeking more just and equitable societies. Watch the video of this discussion.

‘Retablo’ is set in a rural community outside Lima, and tells the story of Segundo Paucar, a 14-year-old-boy who wants to become a master story-box (retablo) maker, just like his father, in order to carry on the family tradition. One day, on his way to a community celebration in the Andes, he accidentally observes his father in a situation that shatters his whole world. Trapped in a chauvinistic environment, Segundo will try to deal in silence with all that is happening to him.

‘Retablo’ is a 2019 Peru/Germany/Norway co-production, directed by Peruvian director Alvaro Delgado-Aparicio. It was shot in Quechua and Spanish. The film has received multiple awards and nominations at international film festivals. Thanks to Phoebe Martin for the recommendation! 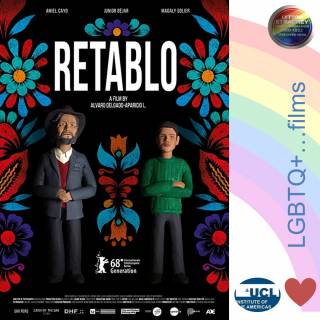 'Cotton, makeup and a prosthetic penis: Male and female trans* carnality repertoires in mid 20th century Argentina'. On February 10 Dr Patricio Simonetto (Marie Skłodowska-Curie Fellow at UCL Americas) will be speaking at the University of Edinburgh as part of that university's Histories of Gender and Sexuality Series.

Jonathan Bell is Professor of US History and Director of the Institute of the Americas since his arrival at UCL in 2014. He is a historian of US politics, with a particular emphasis on American liberalism since the New Deal. Other areas of his interest and expertise include policy history (in particular the relationship between gender and sexuality and public policy), and the history of political ideology. In 2019 he delivered the paper 'Queering the 'Welfare Queen': Poverty Politics and the shaping of sexual citizenship in the twentieth-century United States', at the British Association of American Studies Annual Conference, a conference sponsored by the British Library Eccles Centre for American Studies.

The blog of the Royal Historical Society (RHS) provides an excellent starting point in terms of resources for those interested in LGBTQ+ studies. It includes a substantial reading list of works in LGBT+ and queer histories; links to archives, networks and heritage organisations, a discussion of recent reports that give further context to the RHS LGBT+ report as well as links to sources of support, guidance and advice. Thanks to Dr Josh Hollands for the recommendation.

Phoebe Martin is a PhD candidate at UCL Americas. In February 2020 Phoebe co-organised, with Dr Rebecca Irons (Anthropology), an international multidisciplinary workshop titled: AndinXs: Addressing Contemporary Politics and Gender in the Andes’. A group of young scholars got together to discuss how women’s, feminist, and LGBTQ+ movements have been central in recent uprisings in the region, and how their role has often gone unnoticed. Beyond recent movements, in looking at intersections of politics and gender in the Andes they started conversations that aimed to disrupt narratives about contemporary Andean politics. This event was sponsored by the UCL Institute of Advanced Studies and had Professor Jelke Boesten (KCL) as its keynote speaker. Three of the most relevant LGBTQ+ papers are kindly shared here:

Tolerance from the borderlands

Tolerance from the borderlands

From the Streets to the State and Vice Versa

From the Streets to the State and Vice Versa

‘Torch Song Trilogy’ is a 1988 American film based on the long-running stage hit of the same title by Harvey Fierstein. A very personal story that is both funny and poignant, it chronicles a New Yorker's search for love, respect and tradition in a world that seems not especially made for him. Arnold, a famous drag queen, tragically lost his lover Alan in a hate crime Alan tried to prevent. Arnold is now torn between his memories on Alan, his bisexual lover Ed, their new adopted teenage gay son David and Arnold's never quite satisfied mother.

Despite the occasional lapse into corny camp banter and the slightly unreal atmosphere of pre-AIDS New York gay scene, ‘Torch Song Trilogy’ succeeds because of its sheer power to move and amuse and because of Fierstein’s skilful portrayal of a smart, funny character who simply refuses to give up hope, even in the desperate final confrontation with his wilfully uncomprehending Mom.

The film was directed by Paul Bogart and cast Anne Bancroft, a young Matthew Broderick, together with Fierstein himself, amongst others. Watch the original trailer here.

'Entre la injuria y la revolución' was the first book published by Dr Patricio Simonetto. It studies the making of the first Latin American radical homosexual movement: el Frente de Liberación Homosexual. In this book, Simonetto explores the tensions between the LGTB struggle and the Argentine leftist agenda during the 1960s and 1970s. It was published in 2017.

The Institute's spirit of inclusion and diversity is reflected naturally in what we teach. One of the most popular modules amongst our Undergraduate students last academic year was 'Intimate Matters: Histories of Sexuality in the U.S. and Beyond, 1945-present', convened and facilitated by Dr Josh Hollands

In the 1970s, queer Americans demanded access not only to health and social services but also to mainstream Democratic and Republican Party politics. The AIDS crisis of the 1980s made the battles for access to welfare, health care, and social services for HIV-positive Americans, many of them gay men, a critically important story in the changing relationship between sexual minorities and the government.

'Beyond the Politics of the Closet' is a collection of essays that demonstrate how LGBT people played critical roles in local, state, and national politics. It was edited by Jonathan Bell, Professor of US History and Director of UCL Institute of the Americas and published in 2020 by Upenn Press.

Back in 2015, we were honoured and delighted to have hosted distinguished critic, scholar and artist Dr Rosamond King to deliver her thought-provoking seminar 'The Most Homophobic Place on Earth? Caribbean Myths and Realities' as part of our Caribbean Studies Series.

In 2006, Time magazine had infamously declared that the Caribbean was 'the most homophobic place on earth.' In her talk at UCL Americas, Rosamond S. King questioned the truth of that statement and analyzes its problematic origins. She examined some of the different facets of homophobia in the Caribbean - specifically, violence, discrimination, and hatred - drawing on the research in her book 'Island Bodies: Transgressive Sexualities in the Caribbean Imagination and the work of other Caribbeanist scholars.'

Father and daughter work in the same brothel; they both lust after the same man. 'El lugar sin limites' (The place without limits'), a novel by Chilean writer Jose Donoso, published in 1966, is a story of obsession, helplessness, vengeance, misery, homophobia and political clientelism. It's been interpreted as a study in the deconstruction of masculinity/ies and gender identity. It is set in a remote, dying town, which only remaining functional amenity appears to be its brothel. The establishment is run by a young woman whose father, a trans woman she refuses to address other than as 'dad', is one of the women working in the joint. 'El lugar sin limites' is considered one of the most accomplished works of contemporary literature in Spanish. The story of the book was adapted for the cinema by Mexican director Arturo Ripstein in 1977. Both book and film, released a decade apart, shocked the socially conservative societies of Latin America at the time.

Dr Patricio Simonetto (Marie Skłodowska-Curie Fellow at UCL Americas) he will be speaking at an event at the University of Manchester on 'Queens between theatres and the streets. The global making of travestis’ popular culture and daily life technologies'. All are invited to join the discussion on February 24! For more information and registration details, please click here.

Stephen Colbrook is a PhD candidate at UCL Institute of Americas. His research project is tentatively titled: 'States of Infection: Public Health Federalism and the U.S. AIDS Epidemic', which examines the interaction between HIV/AIDS and state policymaking in the US between the early 1980s and mid-1990s. Existing accounts of the epidemic privilege the response of the Reagan administration and the direct action advocacy of ACT UP, ignoring how state legislatures became the primary site of AIDS policymaking in the 1980s.

The Institute's spirit of inclusion and diversity is reflected also in what we teach. One of the most popular modules amongst our Masters students is 'Challenging the Straight State: Regulation Repression, and Resistance in US Sexual Politics' convened and facilitated by Professor Jonathan Bell. This module examines, amongst various other topics, the ways in which Americans have resisted and contested state regulation and control of their sexualities, and how sites of resistance to state power have played a role in reshaping activist strategies and legal and social norms around sexuality.

One of the many truly exceptional LGBTQ+ events we have held over the years was 'A Queer Québec: Exploring Queer Dance and Circus in Contemporary Québec' in October 2018, with Charles Batson (Professor of French and Francophone Studies at Union College, Schenectady, NY). Through this event, he sought to explore multiple layers attendant to queer performance in Québec’s dance and circus scenes, taking as its point of departure the October 2015 restaging of PPS Danse’s iconic 1993 piece Bagne.

'De Fresa y Chocolate' ('Strawberry and Chocolate') is an acclaimed 1993 Cuban/Mexican/Spanish film production, set in 1970s Havana that tells the story of the friendship between a Political Science student and an artist. Representing Cuba, the film was awarded an Oscar in 1995 to the Best Film in a Foreign Language, and is generally considered one of the best known films dealing with LGBTQ+ topics in the Caribbean.