Introduction to the Testamentum Domini

Associated with the Latin Fragmenta Londiniensia Anteiustiniana are 17 parchment fragments in Greek. Although likewise recovered from bindings, their provenance is as obscure as that of the FLA and it is not clear that the association of the two sets is particularly old. Indeed, the Greek fragments do not form a distinct set. Their shapes are quite various and they represent seven different manuscripts. All but one of the fragments were quickly identified as Bible texts, coming from one Old Testament and five New Testament manuscripts, mostly dating to the fifth century, one dating c.700. One fragment, also fifth-century, remained unidentified. All the fragments, however, were published between 2004 and 2008 by Peter Head of Tyndale House, Cambridge.

Given the possibility that the unidentified Greek fragment might have some connection with the Latin legal fragments, especially in view of the fifth-century date, the Volterra team re-examined Peter Head's publication and also took temporary custody of the fragment itself. Simon Corcoran successfully identified the fragment as coming from an early Christian pseudo-Apostolic "Church Order" work, the Testamentum Domini Nostri Jesu Christi. Although presumed to have been originally composed in Greek in the fourth or fifth centuries, it has survived only in other language versions, most famously in the Syriac translation made by Jacob of Edessa in 687. Aside from a few derivative passages, the newly identified fragment is the only part of the Greek original known still to exist. 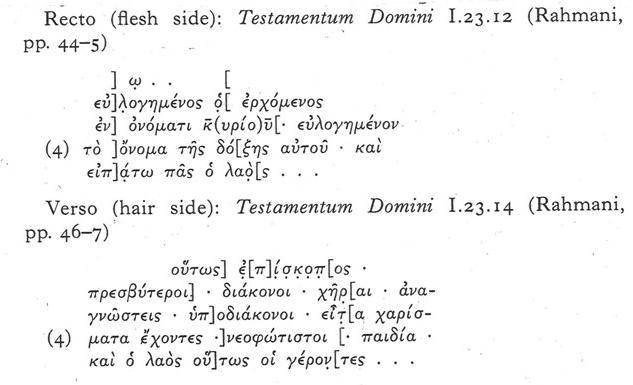 The reconstructed Greek text [as per Corcoran/Salway p. 128]

English translation of the parallel passages from the Syriac (Cooper/MacLean pp.74-5), showing in bold the overlap with the surviving Greek text:

(recto = TD 1.23.12) The priest: "Blessed is He that hath come in the Name of the Lord. Blessed the Name of His praise." And let all the people say: "So be it, so be it."
(verso = TD 1.23.14) Let the priests first receive thus: the bishop, presbyters, deacons, widows, readers, subdeacons; then those that have gifts, those newly baptized, babes. And the people thus: the old men, virgins and the rest.

This work is licensed under a Creative Commons Attribution-NonCommercial-ShareAlike 3.0 Unported License.