Our latest paper has just been published in the journal 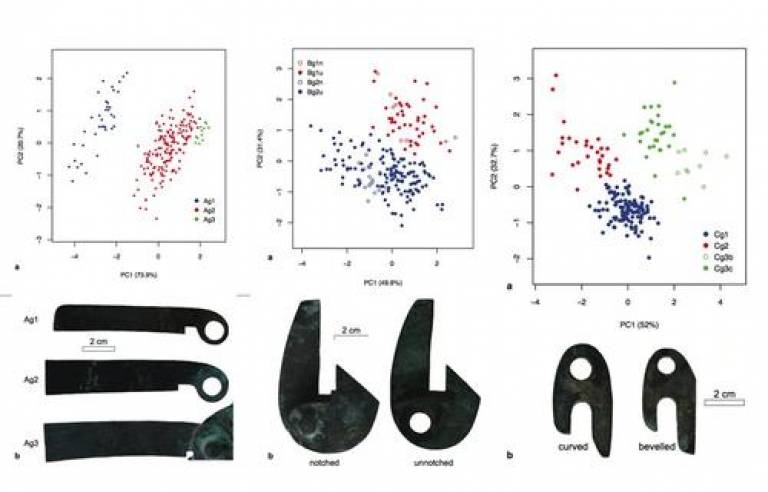 ac.uk/ant/088/ant0880126.htm" target="_self">Antiquity and focuses on the crossbow triggers for the Qin Terracotta Army.

Figure 1. PCA plots of the measurements from trigger parts and their typological variation

Of the many exciting finds from the mausoleum (and stored in the Emperor Qin Shihuang's Mausoleum Site Museum), the bronze crossbow triggers and the topic of the crossbow's use in ancient warfare seems to spark particular interest amongst many people. The Chinese crossbow trigger was an amazing invention, involving a complicated mechanism with five parts that could nonetheless be fixed into the stock of a wooden crossbow and was very easy to operate: just pulling the trigger then released the arrow or bolt towards its target. In comparison to the composite bow, the crossbow would have permitted soldiers to fire heavier arrows more accurately, with greater force and penetrating power, and over a longer distance. So the introduction of triggers truly revolutionised ancient Chinese military warfare. Particularly in the frozen scene of the Terracotta Army, the crossbowmen play an important role in the battle formation, guarding the front and flank of the formation and ready to release the arrows on any closing enemy. The bamboo and wooden parts of the crossbows for the Terracotta Army have perished after 2000 years, but fortunately, over 200 bronze triggers have survived.

In our newly published paper, we attempted to extract more information from these bronze triggers to address wider questions about the kinds of craft production, human behaviour and logistical organisation in Qin society that enable the manufacture of these weapons and their placement in the tomb. How were craftspeople organised in the Qin workshop(s) that produced these triggers? Were the triggers stored in an arsenal or used on the battlefield before equipping the terracotta warriors? How were these triggers transported to the pit and how was labour then organised to arrange the weapons in the pit?

Based on typological and statistical analysis, it appears that a small group (or cellular) production model, rather than a flow-line model, was probably the logistical structure behind the manufacture of these weapons. The typological and metrical data suggested that the trigger parts were produced in batches, and these batches indicated that a number of different moulds existed. The trigger groups produced from the same moulds should therefore be linked with single production events, phases or manufacturing units in the workshop (figure 1). Furthermore, the assembly of trigger parts also showed that these were put together in batches with limited mixing. This reinforces our sense that a single production unit or cell would cast a relatively small number of parts and assemble them before moving on to producing the next batch. This impression is consistent with the one we obtained from the chemical analysis of bronze arrows, which also pointed to a system of cellular production in batches.

As detailed in a previous study, some of the trigger parts bear filing marks and inscriptions, but no obvious wear marks on the triggers' surfaces. This indicates that these batches were possibly stored in an arsenal but not used in the battlefield before being transported to the mausoleum to equip the terracotta warriors.

Furthermore, the analysis of the spatial distribution of the assembled trigger groups shows them to be clustered in the pit. Such spatial patterns are informative of the combination of workshop practice, interim storage, transportation methods and arrangement. The batches of triggers were produced by small cells of craftspeople, and then possibly stored in an arsenal (though the existence of the latter remains hard to pin down). The Qin labourers were also well organised to transport these groups of triggers to the pit: as a matter of fact, some possible "activity areas" can be identified from the overall distribution of the various assembly groups across the pit (figure 2). It appears that the labourers who worked in the pit operated only in certain areas of the pit at one time, each with their own supply of crossbow batches, and each in charge of equipping that particular area of the pit. 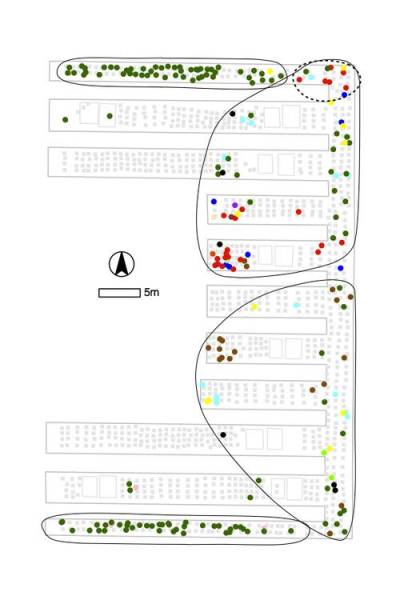 Figure 2. Spatial distribution of trigger assembly groups (the dotted line indicates an example of a small area of very similar triggers in red, perhaps associated with output from one workshop cell or one batch of production, whilst solid lines delineate possible wider activity areas in the pit).