The Union’s annual conference is a major date in the diary for TB researchers. This year, the 51st Union World Conference On Lung Health was held online between 20-24 October 2020. 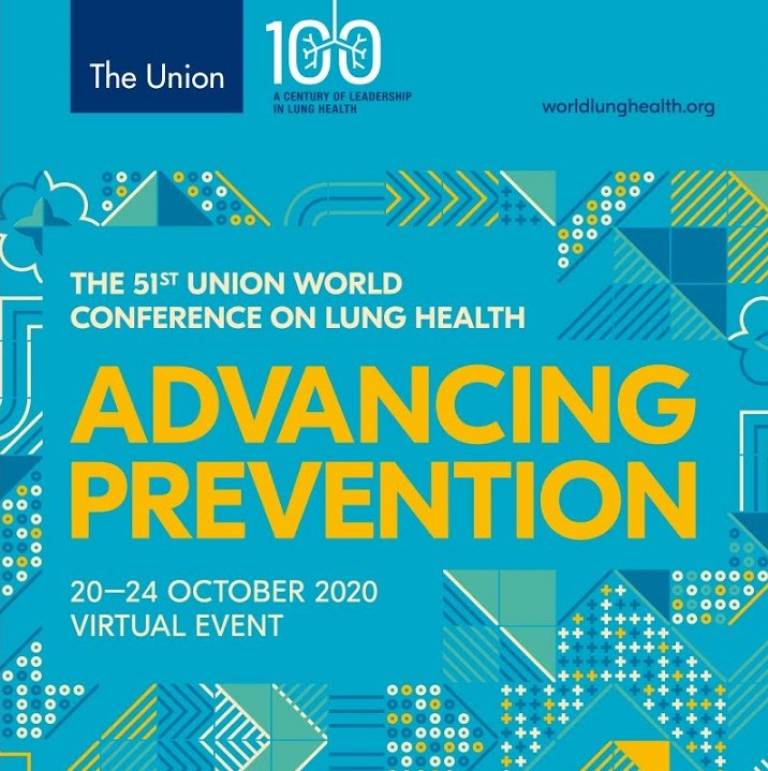 The standard treatment for drug-sensitive TB is 6 months, with previous attempts to shorten this leading to relapses of disease.  It was announced at the conference that for the first time, a major clinical trial (Study 31, run by CDC) showed that a 4 month regimen is as effective as the standard 6 months.

Not to be outdone, the SHINE trial (see below) has shown that treatment of children with less severe forms of TB can also be reduced from 6 to 4 months.

Work presented by UCL-TB researchers, or on programmes with which UCL-TB is involved, included:

1. The IMPACT study aims to identify and support people who will struggle with sticking to their TB medication in the UK (see published protocol).

2. Bedaquiline resistance: After decades without new anti-TB drugs, Bedaquiline is one of a small number of new antibiotics that have been successfully tested and received at least partial approval for use. Understanding how resistance to this drug can occur will be essential for maximising and prolonging its usefulness.

Presentation: Camus Nimmo (UCL Division of Infection & Immunity) talked about work looking at 3500 genome sequences of M. tuberculosis that showed that genetic changes causing bedaquiline resistance were already circulating before the drug was in use (earlier relevant publication; PhD thesis).

3. The SHINE trial aims to shorten TB treatment in children who have less severe forms of TB. At least 1m children develop TB disease every year, with ~250,000 deaths.  However they are less able to tolerate drugs and drug formulations used in adults, and their treatment is usually based on trials on adults.  It was reported at the meeting that 4 months treatment was as effective as 6 months.  SHINE is sponsored by UCL and funded by MRC / DFID / NIHR / Wellcome Joint Global Health Trials  and managed by MRC CTU.

4. The TB-CHAMP trial aims to prevent TB in children who live with someone who has multidrug-resistant (MDR) TB. The trial is sponsored by Stellenbosch University, South Africa, and managed by the MRC Clinical Trials Unit at UCL.

5. The STREAM trial aims to shorten treatment of people with MDR TB. Standard treatment can be up to 2 years, and this trial is testing a 9 month regimen. The trial is managed by the MRC Clinical Trials Unit at UCL.