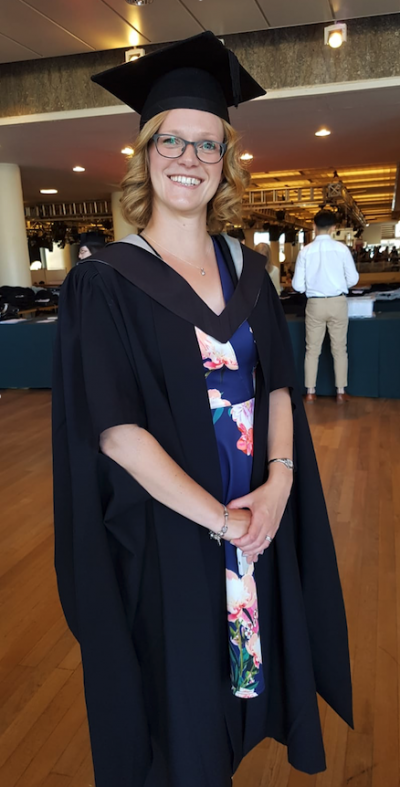 I’m Laura and I graduated in July 2018 with an MSc in Systems Engineering Management.
Currently I’m working on the Long Term Evolution project for the Eurofighter Typhoon aircraft as a senior graphics software engineer; a role I’ve now been in for the last two years.

My proudest working achievement to date is implementing an entirely new graphical format for the cockpit displays as part of the aircraft’s capability enhancements. This was a complex piece of work, for which I created several thousands of lines of code and played an active role in a full sub-system engineering life cycle. For a relatively inexperienced software engineer, it was a steep learning curve but incredibly satisfying to know that my work is now flying and supporting RAF operations. Although a close second is completing the MSc! Doing the degree whilst working full-time took a lot of hard work and discipline I didn’t realise I had.

The journey to my current role didn’t take the most direct route. My undergraduate degree was in Maths and Physics, but I found myself being increasingly drawn to engineering as I progressed through my studies. After achieving my Bachelor’s, I joined the BAE Systems graduate scheme, undertaking four different placements over two years. It was during one of these placements that I discovered my interest in software engineering and upon finishing the graduate scheme I secured a role as a graphics software engineer. The role was within a newly formed team in which I was able to learn and further develop my software skills, leading to my current role as senior software engineer.

My main motivation to study at UCLse was to continue my engineering learning. Prior to commencing my post-graduate studies, all of my engineering knowledge had been gained on the job.  While enjoyable, I wanted to supplement this with the core understanding that comes from academic study.  What’s more, undertaking the degree in Systems Engineering Management at UCLse was an opportunity to complement my role as a software engineer; allowing me to gain a knowledge and better appreciation of the wider system in which my current work lies. Completing the MSc has made me a more rounded and confident engineer and also allows me to work towards chartership, so I can expand my engineering horizons even further.

After successfully coming out the other side of the MSc, the advice I would give to current students is to participate as much as you can – in the classroom lectures, the debates and the exercises – the mix of knowledge and experience from both the tutors and your fellow classmates is incredibly stimulating and you may not find yourself within that blend of people again. Also, pick a topic for your final dissertation that interests you and you can fully immerse yourself in. It can be hard work in the final few months to keep your motivation up; it’s much easier to write about a topic you are passionate about!