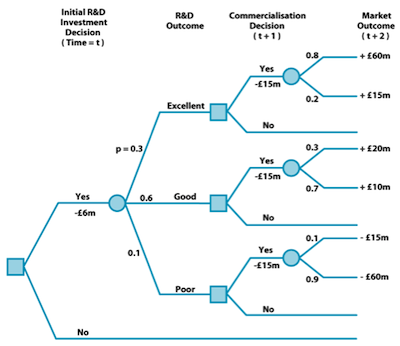 We are interested in understanding the causes of system failure, whether technical, organisational, or the result of individual error. Although many failures are blamed on individuals, there is usually a systemic failure at the heart of the problem. We study major failures like the Challenger and Columbia shuttle disasters and accidents at nuclear power stations like Chernobyl and Three Mile Island to understand the conditions under which technological failures are likely to occur. We also study the factors that lead to robust or high integrity systems.

We are also interested in tools and methodologies for decision making under uncertainty. A common question, for example, is whether to embark upon a research and development project which has unclear payoffs. We use a range of modelling techniques such as decision trees (right) to calculate the costs and benefits of different decisions with uncertain outcomes.

Thesis: Risk and Rationality: An Exploration of Prospect Theory in the Context of Project Management

Project management focuses on delivering outcomes using available resources with predetermined goals (Glemarec & Puppim de Oliveira, 2012). Economic theory presents the concept of utility in decision making, assuming that people are rational decision-makers, although behavioural economics and prospect theory have challenged this idea, making a number of specific claims about how decision-making behaviour in practice deviates from the predictions of rationality. This research explores whether the importance of risk management is understood by project participants, examines the applicability of prospect theory in projects and evaluates whether it adequately describes decision making in the context of project risk management. The research implements a mixed method sequential explanatory approach. Surveys provide quantitative data from a large population and focus group discussions are used to gain a causal understanding of decision makers’ behaviour. This research finds that prospect theory provides a better prediction of project-based decision making than expected utility theory. In particular, prospect theory’s concept of reference dependence applies, with the dual reference points of the current expected cost at completion and the original budget both significantly influencing decisions. When project performance is only slightly below expectations, project managers’ decisions reflect a ‘double-or-nothing’ effect, as they take risks to try to get back within budget. As performance deteriorates further, however, decision makers become more risk averse, fitting a pattern of ‘damage limitation’, contradicting the predictions of prospect theory, which predicts increasingly risk-seeking behaviour when in an unfavourable position.