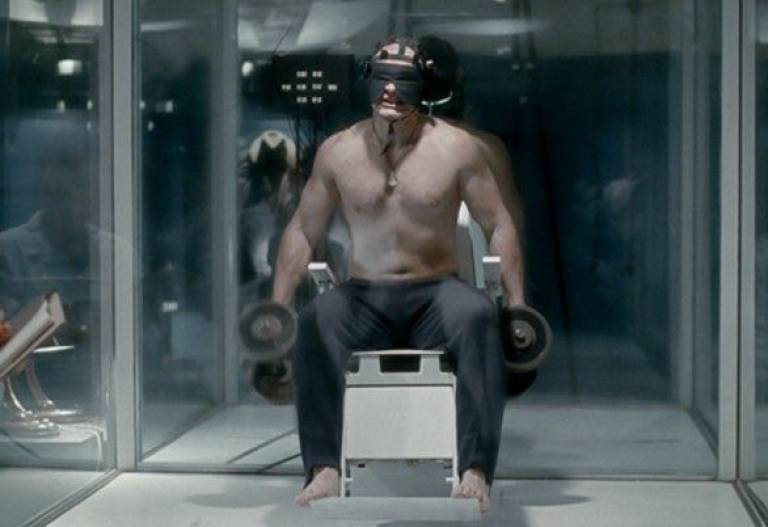 * The title of our event is taken from Mikhail Iampol´skii’s article ‘DAU: Ekstsess, isteriia, razrushenie’, published by Seans on 23 January 2019.

Ilya Khrzhanovskiy’s DAU project was almost fifteen years in the making. In 2005, the young director, whose debut feature 4 (2004) had won several awards, began to plan his second film, a biopic about the Soviet physicist Lev Landau (1908-1968). Over the next three years, however, it would develop into something more ambitious: a multi-media anthropological project that combines (in the words of Khrzhanovskiy’s publicity material) ‘film, science, performance, spirituality, social and artistic experimentation, literature and architecture’ in an attempt not only to tell the story of Landau’s life, but also to recreate the social, material, emotional and ideological circumstances in which he had lived, as a Soviet citizen.

As part of this, Khrzhanovskiy constructed the now infamous DAU Institute, a vast and functioning experimental research facility inspired by actual Soviet structures. Built on the site of the former Dynamo Aquatic Stadium in Kharkiv, Ukraine and occupying 12,000m2, it was the largest film set ever constructed in Europe. Khrzhanovskiy then set about filling it with one of the largest casts. Hundreds of non-professional actor ‘participants’ (the filmmakers apparently held 392,000 auditions) were selected to live and work in this simulated version of the Soviet Union between the late 1930s and the 1960s, and to be filmed while doing so. Some participants remained there for months, others for years.

Running from 2009 to 2011, the project resulted in over 700 hours of footage, all shot on 35mm film. While the films were loosely shot to scripts, the dialogue and action were frequently improvised.

After a lengthy and fraught period of post-production, during which the footage was edited into fourteen feature-length films and several series, the first DAU films were finally shown to the public in January 2019, as part of round-the-clock immersive installations held at the Théâtre de la Ville and the Théâtre du Châtelet in Paris. In February 2020, two further films – DAU. Natasha (dir. Khrzhanovskiy and Jekaterina Oertel) and DAU. Degeneration (DAU. Degeneratsiia, dir. Khrzhanovskiy and Ilya Permyakov) were screened at the Berlin Film Festival, with DAU. Natasha and Jürgen Jürges, the director of photography, winning the Silver Bear for ‘Outstanding Artistic Contribution’. Further festival premières had been planned for this year, but after the global pandemic forced their cancellation, Khrzhanovskiy instead released the films online, via the DAU project website, adding the somewhat opportunistic tagline: ‘DAU: The first cinematic project about isolation, filmed in isolation, for people in isolation.’

According to the website, the films together explore ‘human behaviour in personal, social and professional spheres under a totalitarian regime, and examine the freedom of agency amid a complete lack of freedom. They address important and predominantly taboo matters of human existence.’ Unsurprisingly, the response to them has been polarised. Some commentators have admired the project’s monumental vision, its innovation, its brutal dissection of the workings of Soviet terror and its unflinching exploration of human nature. Others have dismissed it as (at best) a self-aggrandizing and overindulgent exercise in Soviet kitsch and (at worst) as unethical, exploitative and abusive in its methods: the work of a director-dictator.

In this roundtable discussion, hosted by the UCL SSEES Russian Cinema Research Group, our five expert speakers will offer their responses to and assessment of DAU. Each will speak for 10 minutes on key aspects of the project, including: its production history and the filmmakers’ working methods (casting, acting methodologies, working conditions, filming processes, editing); the architecture and set design; the project’s pursuit of ‘authenticity’ and its links to the ideology of blagoustroistvo (the improvement and/or beautification of urban public services or infrastructure); its publicity and media campaigns, exhibitions and installations; the films themselves, their cinematic precedents (or lack thereof), their place in the history of Soviet, Russian and global cinema, their narrative content and their visual aesthetics; the ethics of the project; and its critical reception.

The presentations will be followed by a Q&A and discussion with the audience.

is Professor Emerita in Film Studies, Aberystwyth University (UK); she has taught at Cambridge and Bristol universities, and currently replaces the Chair in Slavic Studies at Passau University, Germany. She specialises in Russian culture, cinema and theatre, and the cinemas of the former Soviet territories, especially Central Asia. She has published widely on Russian and Central Asian cinema, including A History of Russian Cinema (2009) and A Companion to Russian Cinema (2016). She is editor of the book series KINO (Bloomsbury) and KinoSputniks (Intellect), as well as the journals KinoKultura and Studies in Russian and Soviet Cinema. Birgit has published an article on DAU in KinoKultura.

is Reader of Russian and Soviet Film Studies at UCL SSEES and Co-Chair of the UCL SSEES Russian Cinema Research Group. He has published widely on various aspects of Russian and Soviet cinema, both historical and contemporary, with particular emphasis on issues relating to film aesthetics, the relationship between cinema and related visual art forms, the history of film technology, and the creative importance of camera operators. His monographs include The Men with the Movie Camera: The Poetics of Visual Style in Soviet Avant-Garde Cinema of the Silent Era (2013) and Mainstream Soviet Cinematography: The Silent Era (2010). His most recent publications have been devoted to the development of colour in the Soviet Union during the 1930s and 1940s.

is a guest professor of the Fonte Foundation at Freie Universität Berlin where she teaches at the Peter Szondi-Institut of Comparative Literature. She is the editor-in-chief of the online journal Apparatus. Film, Media and Digital Cultures in Central and Eastern Europe (multilingual, peer-reviewed, open access) and the editor of the special double issue Apparatus 2-3: Ghetto Films and their Afterlife (2016-17). Her most recent monograph, Films on Destruction and Liberation (Filme über Vernichtung und Befreiung. Die Rhetorik der Filmdokumente aus Majdanek 1944-1945. Springer VS 2020), focuses on the first Allied film recordings in a liberated German camp, made in the summer of 1944 by Polish and Soviet filmmakers in Lublin/Majdanek. She is currently completing a book titled The Theresienstadt Film Project. Cinema in the Service of Genocide. Natascha is the co-editor (with John Leman Riley and Irina Schulzki) of a compilation of responses to DAU, published in Apparatus, 10, 2020.

is Associate Professor of Russian Cinema and Culture at UCL SSEES and Co-Chair of the UCL SSEES Russian Cinema Research Group. Rachel has published widely on Russian and Soviet cinema. Her monograph, Performing Femininity: Woman as Performer in Early Russian Cinema (I.B. Tauris, 2017), explores the use and representation of the figure of the female performer in Russian films made between 1908 and 1918. Her most recent publication (co-authored with Serian Carlyle) is ‘The politics of reproduction: abortion and authority in Soviet cinema’ in Adele Bardazzi and Alberta Bazzoni (eds), Gender and Authority across Disciplines, Space and Time (Palgrave Macmillan, 2020, pp. 243-70). Rachel’s current research examines forms of female subjectivity in contemporary Russian women's cinema and is funded by a two-year Leverhulme Trust Research Fellowship (2020-2022).

Dr Michał Murawski is an anthropologist of architecture and Lecturer in Critical Area Studies at UCL SSEES, where he is also convenor of PPV and Co-Director of the SSEES FRINGE Centre. He is the author of The Palace Complex: A Stalinist Skyscraper, Capitalist Warsaw and a City Transfixed (Indiana University Press, 2019 and in Polish, by the Museum of Warsaw, 2015) and is currently writing a book on architectural aesthetics and politics in Putin-era Moscow. With Jonathan Bach, he co-edited Re-Centring the City: Global Mutations of Socialist Modernity (UCL Press, 2020); and with Jane Rendell, A Century of the Social Condenser, 1917- 2017, a special issue of The Journal of Architecture (2017). In 2018, he co-curated the exhibition Portal Zaryadye – featuring 18 new works by artists exploring the relationship between architecture, politics and ecology in contemporary Russia – at the State Shchusev Museum of Architecture in Moscow.

is Senior Lecturer in Film Studies at the University Paris 8 (France) where she co-directs the laboratory ESTCA with Christa Blümlinger. She has written three monographs (on Kira Muratova and Alexey Gherman), organised and edited a collective book on contemporary Russian cinema in French (Cinéma russe contemporain, (r)évolutions, Lille: Presses universitaires du Septentrion, 2017) and co-edited with Birgit Beumers Ruptures and Continuities in Soviet/Russian Cinema: Styles, Characters and Genres before and after the Collapse of the USSR (London: Routledge, 2018). She has published a number of papers in collective volumes and in the journals Studies in Russian and Soviet Cinema, Trafic, Les Cahiers du cinéma and Positif. Eugénie has written on DAU for KinoKultura and her chapter ‘Per aspera ad astra, or Through Post-cinema Toward Cinema, the Reverse Journey of Ilya Khrzhanovsky’s DAU’ appears in Dominique Chateau and José Moure (eds), Post-cinema: Cinema in the Post-art Era, Amsterdam University Press, 2020, pp. 311-29.