Comedian, author, writer and frog enthusiast Stephen Fry has lent his voice to an emotive new animation created by researchers at UCL and ZSL in a bid to raise the profile of the deadly Ranavirus threatening UK common frogs. 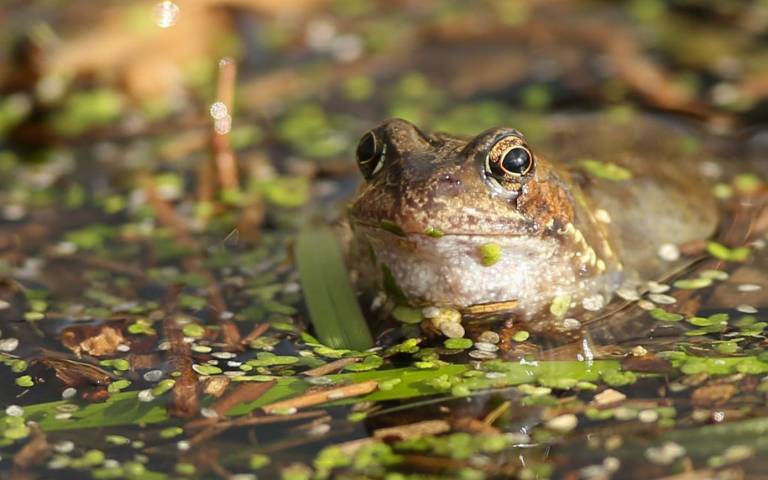 Underlined by a decade of research from ZSL’s Institute of Zoology and UCL, Dr Stephen Price (UCL Biosciences), former UCL student Samuel Pollard and Alice Oliver from Falmouth University collaborated to create the five-and-a-half-minute animation: ‘Ranavirus – Where did the frogs go (and why)?’

It’s known from ZSL and UCL research that at least 20% of Ranavirus cases over the past 30 years could be attributed to human-caused introductions such as pond owners introducing fish, frog spawn or plants from other environments.

Stephen Fry said: “I remember as a child growing up, waiting excitedly until the day frogspawn appeared in my pond. I recall scooping up the eggs with unbridled joy as I watched them develop into tadpoles – sprouting back legs almost as quick as my eyes could blink.

“I’m sure I’m not the only one who has such fond memories of frogs as a child, but this joyful interaction with the natural world could soon be a thing of the past, with dreaded impacts of pollution and climate change exacerbating the spread of this virus in frogs. But there is hope, and everybody can help.”

Introduced to Great Britain by humans in the 1980s, Ranavirus mainly affects common frogs (Rana temporaria) but could also affect other amphibians, fish and reptiles. The virus works by infecting its host’s cells, where it replicates, releasing huge numbers of new virus particles, killing the cells – and eventually its host in the process.

Dr Price, amphibian disease expert at ZSL’s Institute of Zoology and UCL said: “We need to get people’s attention and alert them to this deadly disease unfolding in their back gardens – because they can do something about it.

“People can help stop the spread by avoiding moving potentially infected material such as spawn, tadpoles, pond water and plants into their own pond. Disinfecting footwear or pond nets before using them elsewhere will also help, while building wildlife ponds that mimic natural habitats with plants around the sides – will help frogs to keep cool which reduces the severity of the disease.”

Amphibians are vital to the world’s ecosystems, they are one of the most incredibly diverse forms of life, found on every continent except Antarctica. They are essential components of food webs; frogs and newts keep insect and slug populations in check and serve as prey for foxes and birds. Without frogs, localised ecological collapse could follow.

Former UCL-student, Samuel Pollard, who led on the animation added: “We wanted to use simple flat illustrations to portray complex and serious stories about the natural world, which meant condensing a decade of research into a five-and-a-half-minute long video, while retaining important statistics needed to stress the urgency of this issue.

“Viruses and frogs have been on the planet far longer than humans, and the video illustrates just how quickly humans have spread Ranavirus around the world. Amphibians have become the most threatened vertebrate group on the planet, in really no time at all.

“Frogs, and all amphibians, are facing one of the biggest wildlife health crises of our time. Unfortunately they're not as popular as some other species, so they don't always get the attention they deserve. We’re hopeful that Stephen Fry’s familiar tones, combined with  beautiful animation, will help us to shine a spotlight on these amazing animals."