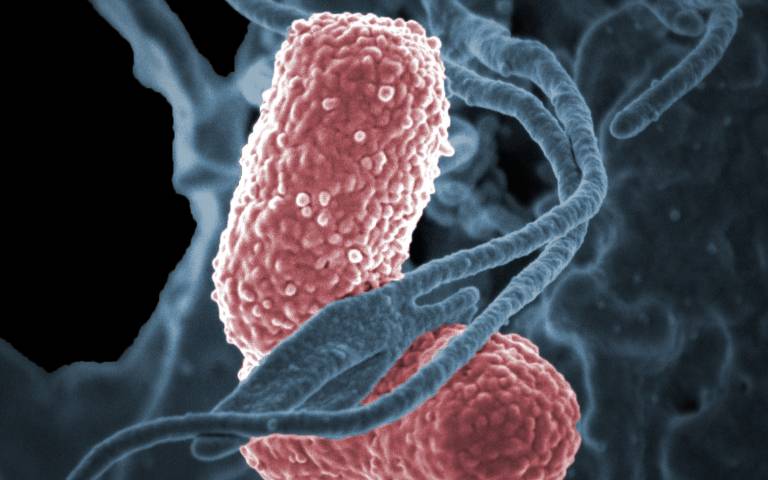 The warning follows new genetic analyses revealing how K. pneumoniae are able to quickly evolve to change their genetic makeup. This has implications for understanding how several species of bacteria –called Enterobacteriaceae– can rapidly adapt to essentially any antibiotic currently used in treatment.

For the study, published today in Microbial Genomics, a team of scientists at UCL Genetics Institute and Peking University People’s Hospital in Beijing tracked the spread of K. pneumoniae in a Beijing hospital following a patient death from blood poisoning in 2016.

By genetically analysing 100 strains of K. pneumoniae bacteria sampled from infected patients, carriers without symptoms and the hospital ward environment over a 14-month period, they found that the bacteria were highly transmissible and able to genetically adapt to any available antibiotic within very short periods of time.

The hospital outbreak strains of K. pneumoniae were found to be very highly drug-resistant, with all isolates analysed showing resistance to multiple drug classes, including to Carbapenems – antibiotics used as a last resort in the treatment of severe infections.

With the number of deaths from drug-resistant infections predicted to rise from 700,000 to 10 million per year by 2050*, Carbapenem-resistant Enterobacteriaceae are listed as one of three urgent threats by the Centers for Disease Control and Prevention** and a key global ‘critical-priority’ by the World Health Organization***.

“Bacteria common in hospitals world-wide have an increasing number of genomic tools in their arsenal to spread and cause deadly infections. Carbapenems are the drugs we use when nothing else works, so an increase in bacteria with resistance to Carbapenems is a really significant public health threat. It means we’re out of treatment options and need to increase our global study and surveillance of these bacteria,” explained study author Professor Francois Balloux (UCL Genetics Institute).

The team used whole genome DNA sequence data to reconstruct the evolution of the highly drug-resistant bacteria, including tracking their transmission within the hospital, spanning three campuses, 19 wards and two intensive care units.

“Using genome-wide genetic data we could clearly follow their spread around the hospital. It’s remarkable to see how easily these bacteria were moving between patients, particularly those in intensive care units, but we also found that they were transmitting across different hospital sites via ward equipment, including ward bed rails and medical devices,” said Dr Lucy van Dorp (UCL Genetics Institute), first author and lead researcher on the British team.

“We found that these bacteria had been in circulation in the hospital for at least a year before we began our surveillance initiative, suggesting the index patient was probably not involved in any subsequent transmission to other patients. Reassuringly, the K. pneumoniae outbreak was subsequently brought under control by hospital-wide interventions including improved cleaning of infected wards and a new air disinfection protocol.”

As well as tracing the spread of the outbreak, the researchers also considered which parts of the bacterial genome were carrying the genes that are needed to evade antibiotic therapy.

“Bacteria like Klebsiella carry additional DNA packaged up into mobile transferable elements called plasmids,” explained Professor Balloux. “The bacteria from this outbreak had extraordinary diversity in the plasmids they carried, and it was these units that held the genes which were helping the bacteria to continue to infect patients, even in the face of treatment with Carbapenems.”

Plasmids allow bacteria to easily transfer genetic information between organisms and are present in many of the species of bacteria that are both common in hospitals and are responsible for infections that are becoming increasingly hard to treat, globally.

“We found the bacteria were carrying many resistance plasmids, and in some cases these plasmids were present in multiple copies. We demonstrated that the number of copies helped to predict how successfully treatment was evaded by the bacteria. This means it isn’t just the presence of a gene conferring resistance that is important, but also its abundance in an infecting strain,” explained Dr van Dorp.

“Most DNA sequencing-based diagnostics used to track outbreaks currently don’t consider this fact, which shows how valuable genome sequencing is as a tool for investigating multi-drug-resistant hospital outbreaks.”

The research was made possible by the participation of patients and staff at Peking University People’s Hospital. The study was funded by the Newton Trust UK–China NSFC initiative.