The life expectancy of thousands of prostate cancer patients, whose tumours possess a faulty gene known to be resistant to hormone therapy, could be significantly improved with chemotherapy, a new UCL-led study finds. 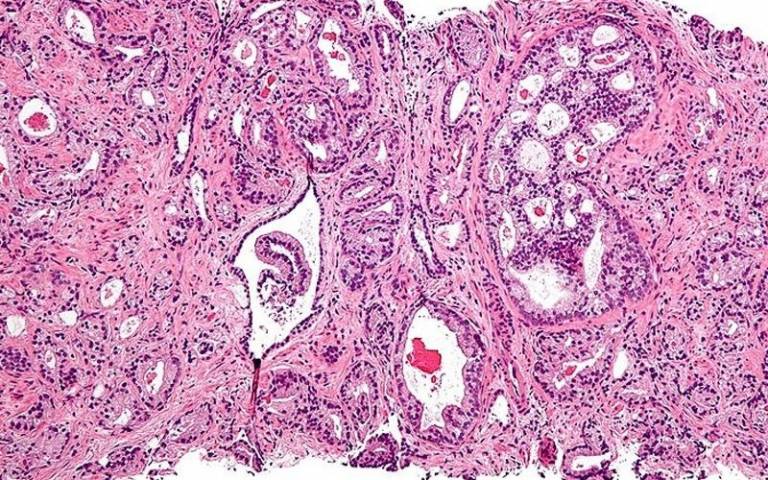 The research, published in the journal European Urology, shows that men with advanced metastatic castration-resistant prostate cancer (mCRPC), who have an abnormal male hormone androgen receptor (AR) gene, are around 20% more likely to be alive 12 months after treatment initiation, if undergoing chemotherapy rather than hormone therapy. After 18 months the figure is almost 40%.

Lead author Professor Gert Attard (UCL Cancer Institute), said the faulty AR gene is found in around one in five men with advanced mCRPC and he believes this research could lead to better outcomes for patients.

“We know that patients with tumours that possess the faulty androgen receptor gene respond poorly to hormone therapy, and the life expectancy of this group is dramatically reduced,” said Prof Attard.

“This is the first study to show chemotherapy could work for this group of men, providing better long term outcomes. We are very excited by these findings, which could offer doctors the option of providing an alternative treatment for their patients.

“However, final studies confirming these findings need to be carried out before this research can become routine clinical practice in the NHS.”

Prostate cancer is one of the most common cancers in men and has one of the highest five-year survival rates when diagnosed in the localised stage (limited to the place where the tumour started). When diagnosed in the advanced stage or when a localised tumour relapses after the initial local treatment, the usual procedure is to fight it using AR deprivation drugs (hormone therapy).

This therapy can be done either by surgical removal of the testicles or using medication that eliminates the testosterone production (chemical castration). However, the majority of patients – more than 90% – after initial castration develop more aggressive, castration-resistant forms and their average survival rate is around 3-4 years.

The other life-prolonging treatment used for patients with mCRPC is taxanes (chemotherapy). Both hormone therapy and chemotherapy aim to stop the proliferation of cancer cells, but the therapies work in different ways.

In 2017, Professor Gerhardt Attard and his team developed a blood test, which could identify patients whose tumours had an abnormality in the AR gene. This study also found these ARabnormalities were present in patients who had poor responses to hormone therapy.

Building on this, the researchers at UCL, the Spanish National Cancer Research Centre, and the Romagna Scientific Institute for the Study and Treatment of Tumors, Italy, used historic plasma samples from 188 patients, who were given prostate cancer treatment between 2007 and 2011.

Using the new blood test, retrospectively, researchers established if a patient had the faulty ARgene (42 patients), and subsequently how each patient responded to the treatment they had received – namely hormone therapy (abiraterone/enzalutamide) or chemotherapy (docetaxel).

The research, which assessed patient samples from hospitals in the UK, Italy and Spain, found that men with the faulty AR gene who had been given chemotherapy were around 20 per cent more likely to be alive after 12 months, than those who received hormone therapy, and after 18 months the figure was almost 40 per cent. The same research found those men without the faulty AR gene had a greater benefit from hormone therapy, introducing the possibility to select treatment based on a blood test.

Co-lead author Dr Ugo De Giorgi (Romagna Scientific Institute for the Study and Treatment of Tumors, Italy) said: “We have demonstrated that patients without the amplification of the androgen receptor gene in the plasma is more successful hormone therapy in terms of efficacy and quality of life; on the contrary, in patients with an amplification of this gene (about 30-40% of cases) it would be more appropriate to undertake chemotherapy with a more effective response than treatment with hormonal therapies.”

Around 47,000 men in the UK are diagnosed with Prostate Cancer each year. Of those, around 36,000 have a curable form of prostate cancer that will not shorten their lives. These individuals never possess the faulty AR gene.Around 11,000 men each year will develop mCRPC and die. Of those men one in five (2,500-3,000) will possess the faulty AR gene.

The study had multiple funders including Prostate cancer UK and Cancer Research UK.