A tiny Mexican fish that can repair its own heart may provide the key to regenerating human heart tissue, according to new research from UCL and the University of Oxford. 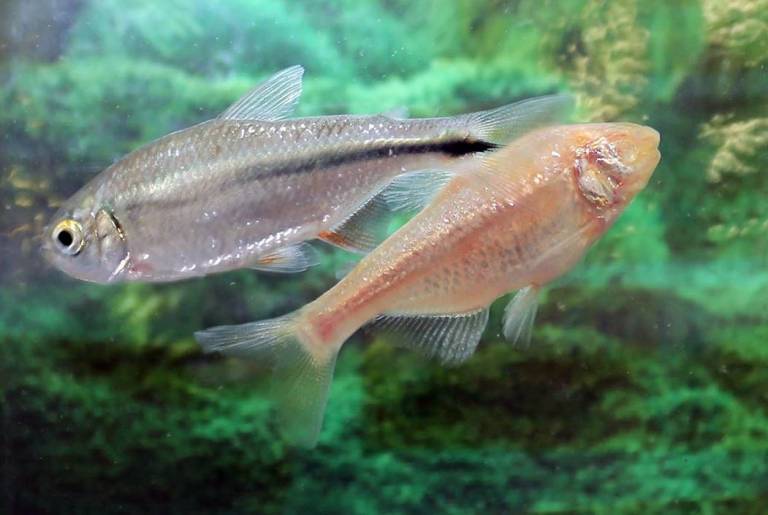 The new study, published in Cell Reports, suggests that a gene called lrrc10 may hold the key to the Mexican tetra fish’s remarkable ability – and one day make it possible to heal heart muscle in people who have had a heart attack.

“Astyanax mexicanus is the Latin name of both the surface-dwelling population of Mexican tetra fish and their cave-dwelling counterparts, the ‘Pachón’ cave fish. But the two populations have evolved very differently, especially in relation to their regenerative abilities. While surface-dwelling tetras have the ability to regenerate their hearts after damage, the Pachón have lost this ability and instead just form scar tissue,” said co-senior author Dr Yoshiyuki Yamamoto (UCL Biosciences).

“This makes these two populations an ideal model for heart regeneration research, which we hope one day will lead to greater knowledge and more effective treatments for damaged human hearts.”

The team bred both surface and cave fish in the laboratory, performing surgery on some fish to remove a piece of their hearts. After surgery, surface fish slowly regenerated the missing tissue, while cave fish developed a scar. When they cross-bred the cave fish with surface fish and performed the surgery, their offspring showed differing levels of regeneration, indicating that the ability to regenerate heart tissue is heritable in these fish.

They then tested the regenerative role of lrrc10, a mysterious gene unique to heart muscle that the fish shares with mice and humans, using knockout models and quantitative trait locus analysis. They found that lrrc10 and three DNA segments may play a role in heart regeneration.

“Quantitative trait locus analysis is the method that has allowed us to find out what part of the surface fish DNA is most crucial for heart regeneration. We have identified three regions in the DNA that contain genes that make the difference between regeneration or scarring after heart injury,” added Dr Yamamoto.

The researchers next want to find out which genes in the regions they’ve identified are the key regulators of heart regeneration.

“The next step is to find out what the reason is that surface fish can regenerate their hearts, but cave fish cannot. What is it that happened during their adaptation to cave life that stopped them from regenerating their hearts? I do believe that this fish can tell us, at some point, how we can really repair the human heart,” concluded co-senior author Mathilda Mommersteeg.