This commissioned portrait commemorates the remarkable life of Sarah Parker Remond (1826, USA – 1894, Italy). It is part of Sasha Huber’s ongoing The Firsts portrait series which she began in 2017. This is a study of historical and systematic racism and its debilitating effects on members of the African Diaspora, with a focus on women as being further underrepresented throughout history. The suppression of this community has often hindered equitable societal and economic developments, and is directly linked to White supremacist thought and action. The Firsts suggests that this hindrance is the reason that even today someone can still be ‘the first Black person’ to achieve specific goals across many fields of practice and in different countries. Like Sarah Parker Remond, some individuals have courageously paved the way for future civil rights actions, and institutional racism and the prejudice involved in its execution within the western paradigm have been successful in holding people back, or then their achievements have not received the deserved recognition and acknowledgment. The Firsts is also dedicated to the first people from the African Diaspora who migrated to various European countries in the 19th and 20th century. The first portrait was of the teacher Rosa Emilia Clay (1875, Namibia – 1959, USA). She ended up in Finland in 1888, with a family of missionaries, like many children brought from Ambomaa (now Namibia). In 1899 she became the first person from the African continent to be granted Finnish citizenship. Due to racism and differential treatment in Finland, Clay decided to move to the United States in 1904. There she was an active director of the American Community Choir and Theater, a teacher of the Finnish language, and a cultural activist in the labor movement. In December 2020 the City of Tampere in Finland announced the renaming of a prominent central square in honor of Rosa Emilia Clay.

Earlier portraits are of the sculptor Edmonia Lewis (1844, USA – 1907, UK) who was one of the first Black artists in Rome and a friend of Sarah Parker Remond. This portrait was made during an artist’s residency in Rome. It was the first portrait of which Huber made a stop motion video. The music for the video was composed and performed by Mélissa Laveaux, who originally introduced Huber to Lewis.

The Arctic explorer Matthew Henson (1866, USA – 1955, USA) was the first person to reach the North Pole, on April 6th, 1909. His role in the Robert Peary expedition was minimized on account of his skin colour, and was only acknowledged thirty years later.

The novelist James Baldwin (1924, USA – 1987, France) was one of the first Black people in the Swiss mountain village of Leukerbad, where he worked periodically on his first novel, Go Tell It on the Mountain, in 1951–53. He writes about his experience in the essay Stranger in the Village. This particular portrait is in public space, made directly onto one of the window shutters of his then partner Swiss painter Lucien Happersberger’s family chalet where he lived in Leukerbad, with the acknowledgement of the James Baldwin Estate in New York.

The author, actor and ex-politician Jani Toivola (1977, Finland) was the first Black parliamentarian in Finland (2011–2019). The portrait was a collective gift to him from us, the BIPoC community in Helsinki, as a thank you for his pioneering work and inspiration.

The politician Tilo Frey (1923, Cameroon – 2008, Switzerland) 50 years ago – in 1971 when Women in Switzerland were finally allowed to vote nationwide and to run for public office – was one of the first twelve women and the first woman of color to be a member of the National Council. In June 2019 the Espace Louis Agassiz square at the University of Neuchatel, where she and Agassiz studied, was renamed after Frey. The making of this portrait has also been made into an art video, with music by Brandy Butler, and is part of Autograph’s collection.

Yemi Akinyemi Dele (1981, Czechia) is one of the first Afro-Czech choreographers and a multi-disciplinary creator who works worldwide, and supports young people in Nigeria and in the LGBTQ+ community.

An upcoming portrait is that of Katherine Johnson (1918, USA – 2020, USA) who was a mathematician at NASA. She calculated the trajectories for the Apollo 11 moon landing in 1969.

Huber has used a compressed-air staple gun to create these portraits, aware of its symbolic significance as a weapon. She realised when she first started working with this method in 2004 that the symbolism of this tool offers her a way to renegotiate unequal power dynamics. For Huber stapling was initially a way of ‘shooting back’ and has evolved from there to ‘stitching the colonial wound’, as a way of tending these deep wounds and making them visible in a sonic and haptic way. For this particular portrait series she is working on a base of black-painted acoustic board. She relates to this material used to mute sound as a way to address the often-muted histories of the people depicted. She recently started calling these artworks ‘pain-things’. 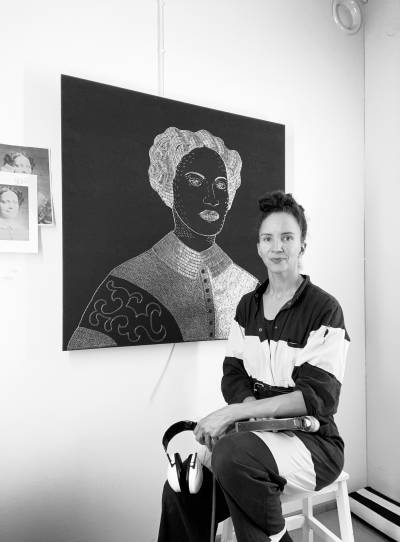 Sasha Huber (1975, CH/FI) is a Helsinki-based, multidisciplinary visual artist-researcher of Swiss-Haitian heritage. Huber's work is primarily concerned with the politics of memory and belonging, particularly in relation to colonial residue left in the environment. Sensitive to the subtle threads connecting history and the present, she uses and responds to archival material within a layered creative practice that encompasses performance-based interventions, video, photography, and collaborations. Huber is also claiming the compressed-air staple gun, aware of its symbolic significance as a weapon while offering the potential to renegotiate unequal power dynamics and names these laborious artworks ‘pain-things’. She is known for her artistic research contribution to the "Demounting Louis Agassiz" campaign, aiming at dismantling the glaciologist’s lesser-known but contentious racist heritage. She holds an MA in visual culture from the Aalto University in Helsinki and is presently undertaking a practice-based PhD at the Zurich University of the Arts in artistic research. Huber has had solo exhibitions, joined short film festivals and residencies around the world, and participated in international exhibitions, including the 56th Venice Biennial in 2015. In 2021 Huber started her first solo exhibition tour under the title “You Name It”. The tour begins at Kunstinstituut Melly in Rotterdam and continues to further institutions such as The Power Plant Contemporary Art Gallery in Toronto, Autograph in London, and Turku Art Museum in Finland. In 2018 Huber was the recipient of the State Art Award in the category visual arts given by the Arts Promotion Center Finland.