Diamonds will shine a light on quantum mystery in new project

Project receives funding from STFC to make a diamond exist in a superposition of two places at once. 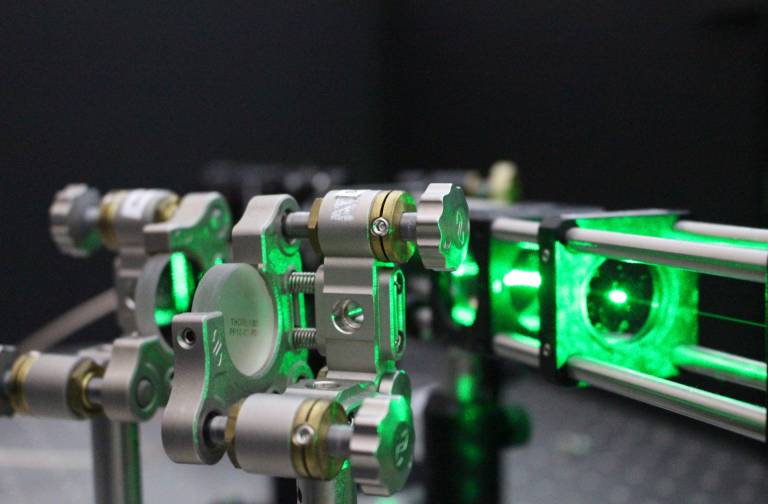 A new project at UCL and the University of Warwick aims to answer a fundamental question of quantum physics, by attempting to make a diamond exist in a superposition of two places at once. The ambitious experiment may one-day lead to a long sought-after test of the quantum nature of gravity, through a method that was pioneered in a joint work by a team of researchers from UCL, Warwick and a several other universities.

The project has been made possible by a grant of £500,000 from the Science and Technology Facilities Council from their Quantum Technology for Fundamental Physics programme. Seventeen new projects will tackle fundamental research questions with quantum technology – from the exploration of antimatter gravity to dark matter detection. Four of these seventeen projects are co-led by UCL researchers.

UK Research and Innovation (UKRI) is investing £6 million towards that endeavour and in support of its existing Quantum Technologies for Fundamental Physics (QTFP) programme. The programme receives joint funding from the Science and Technology Facilities Council (STFC) and the Engineering and Physical Sciences Research Council (EPSRC).

Quantum mechanics allows for an object, however big, to be described as existing in different places at once. This is called a spatial superposition. Despite being counter-intuitive and in direct conflict with our everyday experience, the superposition principle of quantum mechanics has been experimentally verified using atoms and molecules.

Physicists at the University of Warwick will use tiny synthetic diamonds, called nanodiamonds which are just one micron across to explore if larger objects can exhibit quantum behaviours. The researchers will work with collaborators at Element Six and the University of Cardiff to make nanodiamonds with a single precise imperfection. This defect in the highly regular structure of a diamond is called a nitrogen-vacancy centre (NVC).

Nitrogen-vacancy centres in diamond are a powerful platform for several quantum technologies including quantum computing, quantum communication and quantum sensing. The scientists expect that their work in this project will advance these quantum technologies and should lead to a new class of more sensitive sensors based on levitated nanodiamonds in a superposition.

Dr Gavin Morley of the Department of Physics at Warwick said: “Atoms and molecules are very well described by quantum mechanics, but what about much larger things? The project has the ambitious goal of testing whether levitated nanodiamonds made up of more than a million times more atoms can display this quantum behaviour.

“Quantum mechanics and general relativity are our best explanations of the physical world but, for me, understanding how to make them work together is the most interesting problem in physics. Levitating nanodiamonds provide a pathway to eventually doing the experiments that could unlock this deep puzzle.”

Professor Sougato Bose of UCL said: "We are thrilled that this offers us the opportunity to take a very first step towards a quantum superposition with a crystal both ‘here’ and ‘there’, which will eventually pave the way to testing the quantum nature of gravity."

Professor Grahame Blair, STFC Executive Director, Programmes, said: “This new cohort of projects should make a valuable contribution to our understanding of the universe using cutting-edge quantum tech such as quantum computing, imaging, sensing and simulations.

The new grants continue to support the UK research community in exploring the diversity of quantum technology applications for fundamental science – from neutrino mass studies to searches for violations of fundamental symmetries of nature.”