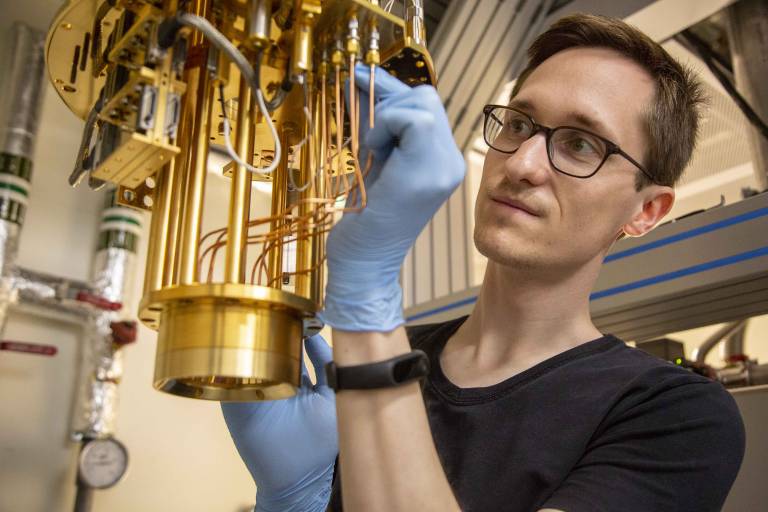 A recent paper published in Physical Review Letters from Simon Schaal of UCLQ, together with his collaborators from the University of Cambridge, Hitachi, CEA, and University of California Berkeley, demonstrates that the signal-to-noise ratio of radio-frequency gate-based readout of silicon quantum dot devices can be improved using Josephson parametric amplification.

Spin qubits formed in silicon quantum dot devices are promising candidates for large-scale quantum computing. Their advantage stems from long coherence times and their ability to be packed closely together in large numbers.

To retrieve the outcome to a quantum computation it is essential that the spin readout mechanism is very precise and sensitive enough to obtain spin information much faster than the spin relaxation time. Moreover, when implementing error correction schemes which allow detection and correction of errors throughout the computation due to noise in the device, readout needs to be performed even faster.

Currently, gate-based sensing using radio-frequency reflectometry offers a very compact mechanism for efficient readout of many spin qubits, however further improvements in sensitivity are required to meet the readout fidelity and measurement timescales that allow implementation of fast feedback in error correction protocols.

To make these improvements, Schaal and colleges looked to the neighbouring field of superconducting circuits where amplifiers based on Josephson junctions that operate near the quantum limit of noise have greatly improved the signal-to-noise ratio for readout.

Schaal and colleges showed that adopting such approaches in the measurement of quantum dots - combining radio-frequency techniques for capacitive gate-based sensing of silicon quantum dots with Josephson parametric amplification - leads to an improvement in the readout fidelity and measurement timescales.

In their paper they report: “Based on our achieved signal-to-noise ratio, we estimate that single-triplet single-shot readout with an average fidelity of 99.7 % could be performed in one microsecond, well below the requirements for fault-tolerant readout and 30 times faster than without the Josephson parametric amplifier.”

Behind The Paper: Efficient readout of a silicon-based quantum computer